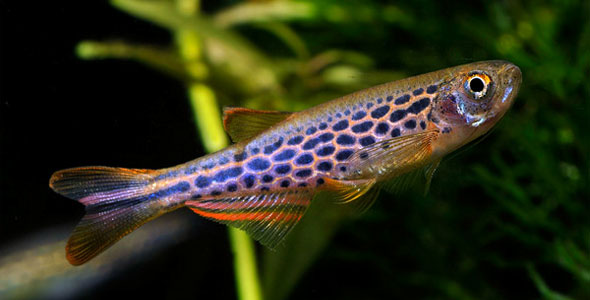 Boisterous and beautiful, the Danio brings flash and pizazz to any home aquarium. These small beauties are easy to keep, hardy and adaptable to a wide variety of water conditions. Preferring to spend time in schools, the small Danio is happiest in groups of three or more since they will become aggressive if left as individuals. Danios love to swim, so a long tank is recommended. A good current provided by a filter will give them something to swim against if a long tank is not available. Danios are incredibly friendly and peaceful. They get along with one another regardless of species, so potential owners may want to consider combining different varieties to get all the different combinations of color and pattern in the tank.

Zebra – Like its name would suggest, the Zebra Danio is black and white stripped. Surprisingly though, these stripes run horizontally along the body and into the tail, rather than vertically.

Pearl – Pearl Danios are flashier than most. They have a dark colored body speckled in light colored spots. Their fins are black and orange stripped, adding a surprising splash of color to this tiny treat.

Spotted – The Spotted Danio is somewhat plainer than the Pearl. Its golden body is covered in small spots that are found everyone, including the fins and tail.

Leopard – Similar to the Spotted Danio, the Leopard Danio is also covered in spots, though these spots are smaller and less organized. They are also oddly shaped, much like those on the pelt of a leopard.

Perhaps the greatest concern when raising Danios is not for the Danios but for the other fish in your tank. Though they are very peaceful and friendly, Danios are quite active and love to dart around the tank in their schools. They may accidently nip at the fin of another fish in their exuberance. If you have timid feeders in the tank, they may starve when faced with the voracious appetite of an easily excited Danio. Their tank requirements are simple as well as they prefer a wide water temperature range (between 68-80˚F) and a wide pH range (between 6.0-8.0)

Danio are surface feeders and omnivorous. They will exist happily on a variety of foods, including flake food, brine fish, and sinking tablets. A fun treat would be the addition of some bits of lettuce to the tank for the fish to nibble on.