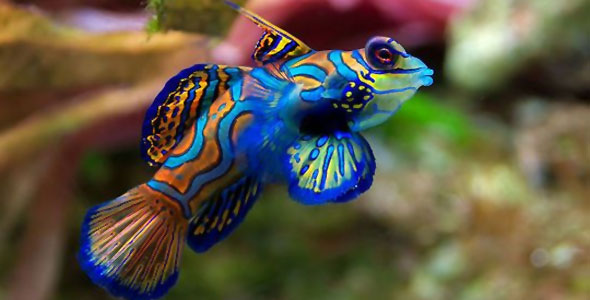 Brightly colored Mandarinfish are small Dragonet fish that hail from the same species of fish as the mighty and terrifying Barracuda. Unlike it’s brazen cousin, however, the small Dragonet prefers to hide from trouble, quickly burying itself in sand and rubble when nervous or agitated. These small, shy little fish bring brilliant color to your home aquarium, but be prepared to parent these fish often (especially at meal times) as their timid behavior often leaves them vulnerable to the bullying of other fish. These stunningly colored little fish prefer to spend most of the time around the bottom of the aquarium. They do not get along well with others of the same species, especially males, but will do very well with other shy fish as all they desire is to be left alone.

Mandarinfish – The bright and brilliant Mandarinfish dazzles the eye. Most commonly seen in a winding orange and blue pattern, it is certain to be a colorful addition to the marine aquarium.

Scooter Blenny – A bit duller than the bright Mandarinfish, the Scooter Blenny resembles the rocky reef bottom it loves to dive into. Often seen in spotty brown or red, it is built for long swims along the floor of your aquarium.

Spotted Mandarinfish – The Spotted Mandarinfish has a greenish-brown body covered in black spots. These spots have a thin golden ring on the inside and are circled by a beautiful turquoise band. They make a startling picture, sure to capture the eye of any onlooker.

The little Dragonet fish is quite picky, shy and needy. While their water requirements are fairly standard, they will starve themselves to death if they do not receive the proper diet. In addition, they require a tank that has a soft, sandy or pebbly body. The bottom must be soft and deep enough for them to bury themselves in whenever they feel threatened or bothered. Dragonets are also easily bullied and bothered and will not survive well with nosey or aggressive fish. They prefer small tanks with lots of crevices. When adding them to a reef, their size should be taken into consideration as there have been stories of Dragonets being captured and eaten by tank anemones, otherwise they do not harm or bother the reef.

Dragonets must be fed a live diet of meats. They are highly finicky eaters, easily bullied out of their food, and will starve to death rather than eat food they do not want. Brine shrimp, mysids, worms or copepods are all preferred. It is also a good idea to add Dragonets to tanks that have an already established invertebrate system so that they can eat at will, rather than waiting for meal times where larger fish can bully them out of their food.