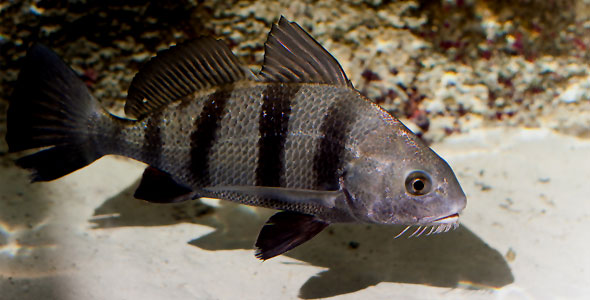 Drums and Croakers are unique fish with fitting and unique names. These fish emit a drum or croak-like sound that is created by tapping a special set of muscles against the air bladder. Both freshwater and tropical Drumfish are highly sought after; freshwater varieties are for both food and pets, while the brightly colored marine varieties are highly sought for aquariums. Drums and Croakers are excellent tank companions; they get along with most everyone, are not territorial and are far from aggressive. It is important to note, however, that they are also slow eaters and may starve if care is not taken to ensure that they are receiving the proper amounts of nutrition.

Jackknife – The Jackknife Drum fish is the best known of the Drum fish. It is fairly sensitive and does not do well when bullied. It is a somewhat stunning fish with a black and white striped long, thin body and an almost vertically extending dorsal fin, which gives it the unique look that inspired its name.

High Hat – The high hat is a broader fish than the Jackknife with a longer and more hump-shaped back. It has horizontal rather than vertical stripes and receives its name from the fin that sits on top of its head and extends straight up like a tall top hat.

Drums and Croakers require lots of swimming space, warm water between 78-82˚F, and a pH of about 8.2. Some varieties are particularly sensitive to bullying, so be sure that more aggressive companions are watched to ensure that your Drums or Croakers are not being bullied too much.

Drums and Croakers are carnivores and do best on a diet of fresh or frozen meat such as crab or shrimp. They can survive off frozen foods, but it is imperative that owners ensure that Drums and Croakers be allowed to eat. If they are over bullied they will avoid meal times in order to stay away from other fish.