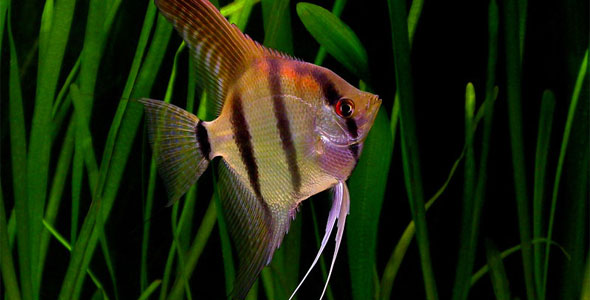 The Freshwater Angelfish hails from the rivers of South America. Triangularly shaped and thin pressed, they hide among roots and plants before ambushing their prey. Their coloring helps to provide additional camouflage. Interestingly, Angelfish form monogamous mating pairs. They are one of the most commonly kept freshwater aquarium fish as they bring a unique and beautiful shape and coloring to the tank. They are considered semi-aggressive and should not be kept in aquariums with tiny fish such as Tetras as the Angelfish may eat them. For those interested in breeding fish, the Angelfish is ideal. They are easy to breed in an aquarium, however care must be taken to protect the young from their parents as generations of inbreeding have led to parents tending to eat the young. As Angelfish mate for life, it is also important to preserve both fish for as long as possible. Angelfish are dedicated parents and the raising of a clutch of eggs into fry and then fish may be fun to do with children.

There are three species of Angelfish, each available for freshwater aquariums with a variety of colorings and markings.

Pterophyllum leopoldi – These are the most difficult to find in pet stores and are also known as Tear-drop, Long-nosed, Dwarf, or Roman-nosed Angelfish. They are the smallest and most aggressive of the Angelfish.

Pterophyllum scalare – These are the most common of the Angelfish and the most easily located in the everyday pet store. These can be found in a variety of colors and in pet stores are likely the result of generations of selective breeding. They are available in silver, gold, zebra, black lace, smokey, chocolate, half-black, Sunset Blushing, koi, leopard, Blue Blushing, silver-gold marble, ghost, gold marble, marble, black hybrid, pearlscale, black ghost, and albino.

Angelfish do well in a tall and deep aquarium that is well planted and filled with warm water, preferably around 80˚F with a pH between 7 and 7.5. They are generally peaceful but should be kept away from significantly smaller fish, such as Tetras, or you may find your smaller fish being eaten for lunch. Similarly, you should not have aggressive fish in a tank with Angelfish as their long, flowing fins can be vulnerable to the bites and nibbles of others.

It is important that you never over-feed your Angelfish. They are known for over-eating and will gorge themselves to death if care is not taken when feeding. They do best when fed a mixture of flake, live and frozen food; a favored treat is mosquito larvae.