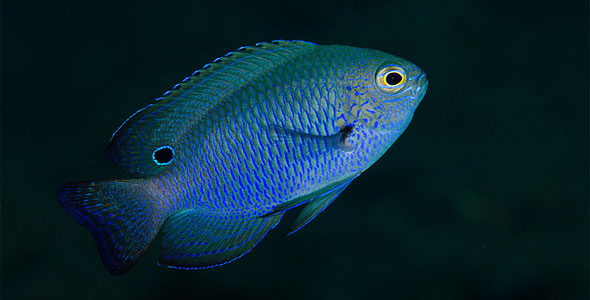 The Damselfish is a brightly colored tropical fish that inhabits coral reefs. They are often used by aquarium owners to help biologically stablize a new aquarium as they provide numerous beneficial bacteria. In the wild, these fish are known to cultivate and farm a specific type of algae. This is an agile and active fish that is easy to feed and very hardy. Potential owners should be aware that most species of Damselfish are somewhat aggressive. It is important to provide fish with plenty of space, rock and coral so that territory disputes are kept to a minimum.

Blue – A brilliant electric blue in color, this damselfish brings stunning color to the aquarium. Like most Damselfish, the Blue Damselfish is aggressive and requires lots of space.

Green Chromis – Though it appears a pale white at first glance, the Green Chromis has an aura of bright neon green that reflects as it slips through the corals and rocks of the reef. While most Damselfish are highly aggressive, the Green Chromis is very peaceful and actually prefers to be housed with a few of its own kind in order to feel more comfortable in the aquarium.

Humbugs – Black and white vertical stripes decorate the Humbug Damselfish, giving it a sour look to match its demeanor. One of the more aggressive Damselfish, it is very territorial and not likely to do well when forced to compete for territory.

Damselfish are highly territorial and can be very aggressive. They will fiercely quarrel amongst themselves for the best locations within the corals and reefs. Out in the open ocean this is less of an issue, but in the confined space of an aquarium it can lead to violent upsets. Aggressive species of Damselfish are best housed alone. If you have more than one, be sure to house them in a large tank with lots of rock and coral formation so that they can establish what is theirs without too much bloodshed. Damselfish are often used as tank starters as they can bring biological stabilization to a tank quickly. Be careful, however, when adding new fish. Their aggression and territorialism are not limited to their own species. Your starter Damsels may not take kindly to having their tank space encroached upon by new additions.

Damselfish are far from picky when it comes to food. Many adapt easily to flake food, but a good diet should include meat and vegetation. One favorite treat is a leaf of Romaine lettuce dropped into the cage a couple times a week.