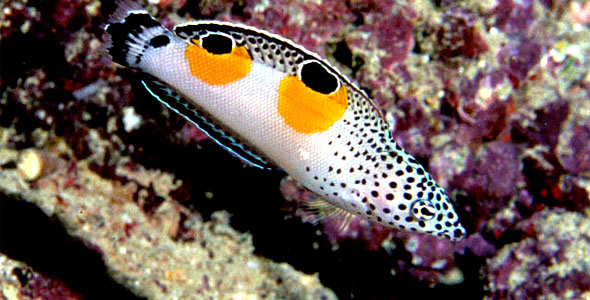 Wrasse are a species of fish that are excellent for the beginning aquarium owner. Their easy going personality, heartiness and adaptability make them perfect for a starter tank. Though most Wrasse are smallish, those in the wild can grow to be over eight feet in length. Thankfully, these are not commonly available for aquariums. The name wrasse comes from the Welsh word gwrach, which means old woman or hag, a name the fish received perhaps because of their oddly shaped mouths which gives them a hag-like appearance.

Interestingly, out in the open ocean waters the Wrasse are best known for the traits of one particular type of Wrasse: the Cleaner Wrasse, Labroides dimidiatus. This Wrasse will set itself up in a rock or crevice known as a “cleaning station.” Large fish, such as groupers, will pull into the “cleaning station” and park, mouth open. The Wrasse will then take its life into its hand and get to work “cleaning” the larger fish, ducking into the mouth and gills to pull off dangerous parasites. Though the larger fish could easily eat the Wrasse, it instead allows the Wrasse to work before swimming away. Apparently, the larger fish gets more benefit from allowing the Wrasse to work than it does from eating it.

Bluehead – A bright and vibrant addition to the tank, the Bluehead Wrasse is a stunning combination of colors. The body is a solid yellow and is separated from the head by two bands of black surrounding a band of white. All of this ends in a head that is, guess what, blue!

Eclipse Hogfish – The Eclipse Hogfish lives up to its name. Its coloring mimics that of a lunar eclipse with the back portion of the body a bright cream color, the head a deep red color and both divided by a wide band of black which cuts diagonally across the body.

Twin-Spot – A bit plainer perhaps than the Bluehead or Eclipse Hogfish, the Twin-Spot Wrasse begins with a solid white body. The head of the Twin-Spot Wrasse is covered in small, black freckles that can be found in the fins and tails. Its name, however, comes from the two splotches of yellow, red or orange on its back. These splotches bleed up into the dorsal fin where two large, black spots can be found sitting on the color, mimicking eyes.

Bird – A beautiful blue, the Bird Wrasse brings a regal sort of splendor to the aquarium. Somewhat rare, this beautiful fish differs from the others, not just in its solid coloring, but in the shape of its nose. The Bird Wrasse displays a long, protruding mouth that is reminiscent of an ant-eater. Its body is a solid, reflecting aqua- green.

The Wrasse is a very hardy and easy-going tank mate. They can handle fluctuations in water quality and temperature fairly well, but prefer to be kept in a tank between 75-70˚F with a pH around 8.3. They do best in large tanks as they can grow quite large. Wrasse are very peaceful and can be kept with a number of other fish, as well as other Wrasse, without worrying about territorial disputes and other aggression problems. Wrasse do like to bury themselves in the sand when upset or afraid, so it is important to keep a few inches of sand or other soft bottom for them to bury in.

Wrasse are laid-back carnivores. In their natural habitat they would exist off parasites and other invertebrates, so in the tank its best to feed them brine shrimp or chopped up, frozen shrimp. They will also eat flakes and freeze dried food.