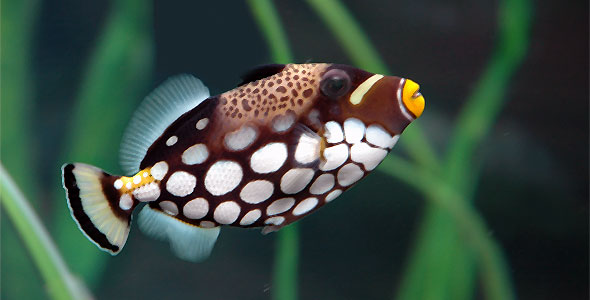 One of the largest fish available for the home aquarium, the Triggerfish is beautiful and notoriously aggressive. They are not recommended for trial and error fish owners or novice aquarium keepers; one badly placed Triggerfish can completely destroy an aquarium. They are very brave and curious, divers often find these fish providing companionship, as well as lively. These fish have a thin, oval shaped body with a large head that ends in a small but strong mouth. Triggerfish have teeth that have been adapted for crushing shells and will bite. The dorsal fin has three spines in it; all three retract into a groove when not needed. The name “Trigger”fish was given because of the trigger like action that the spines can take. In order to protect itself from predators, the Triggerfish will raise the first spine and lock it into place with the second spine. Once these two spines are locked into place, the first cannot be lowered until the second is depressed allowing the Triggerfish to lock itself tightly into crevices making it nearly impossible for a predator to pull it out of any hole. Triggerfish will do this at night, ducking into a crevice and locking into place until morning, so tanks must be adapted to allow this behavior.

Clown – One of the most highly sought after Triggerfish, the Clown Triggerfish is a large, black fish with large white spots on its belly and sides, bright yellow lips, and a “leopard” spotted back. This is a large fish that will grow to about twenty inches if your tank is large enough to accommodate it.

Humu-Humu – Also known as the Picasso Triggerfish, this species has a blue and black band stretching over the head from eye to eye, a white belly, yellow lips, striping along the back, and horizontal stripes leading into the tail. It is one of the more aggressive Triggerfish, particularly when defending a nest of eggs. Smaller Picasso “triggers” may do well in a community aquarium as they tend to be slightly less aggressive. This species also requires algae in its diet.

Queen- The Balistes vetula is vibrantly colored, with small stripes along its back and golden coloring over the rest of the body. It is generally more docile than other Triggerfish. Queens grow rapidly and may develop long filaments on the fins.

Niger – These solid black Triggerfish tend to be slightly less aggressive than some other Triggerfish, though great care should still be taken when adding them to the tank. They do not acclimate well to fish that can challenge them in size.

It is most important to emphasize that Triggerfish are not for beginners. This is a highly aggressive species of fish that is relatively expensive. Extensive research should be conducted to see which variety of Triggerfish will respond well to your current reef inhabitants. Trigger fish require lots of room to swim and are not appropriate for smaller tanks. They need nooks and crannies to hide in that are large enough for them to engage in their “trigger” fin behavior. Overall these are hardy fish that will adapt quickly and easily to tank life. These fish are carnivores; do not keep them in tanks with smaller fish or you are likely to lose a number of fish to the Triggerfish’s appetite.

With their strong jaws and teeth, Triggerfish are somewhat obvious carnivores. These fish will eat anything they can fit in their mouths, including clam, crab, fish, coral, shrimp, snails and algae. Live brine shrimp and chopped up, frozen fish or shrimp will work well for these. Humu-Humu or Picasso Triggerfish require some algae in their diet