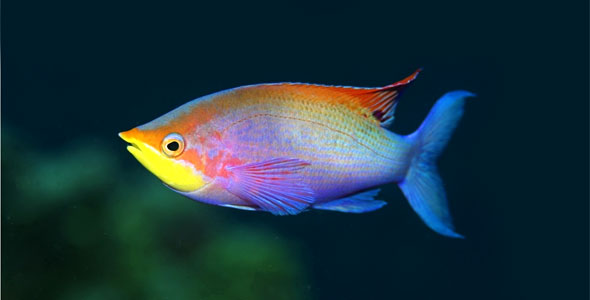 Native to Australia and New Guinea, the Rainbowfish is a small, brightly colored freshwater fish that makes a beautiful addition to any aquarium. Less than five inches in length, they are hearty and ideal for beginning aquarium owners. A schooling fish, they do best in groups larger than three and tend to be active, especially during breeding periods. Rainbow fish will spawn all year, though they are particularly prolific during their natural rainy seasons. They will attach the eggs to whatever vegetation is readily available, with fry hatching a week to 18 days later.

Australian – With iridescent blue scales outlined in a darker blue, the Australian Rainbowfish is a beautiful sight to behold. Schools streak through the water like flashes of blue-ish silver, drawing the attention of even the casually observing eye.

Rainbowfish are very easy to care for and have very few tank requirements. They get along best in schools of three or more and tend to be energetic. Their ideal tank has lots of free swimming area, but is also well planted. However, Rainbowfish highly prefer plants with fine leaves such as foxtail or milfoil. They prefer a water temperature between 72-79˚F and a pH of 6.5-7.5.

Easy to feed, the Rainbowfish will eat flake food and live food such as bloodworms, mosquito larvae and brine shrimp, as well as a healthy supply of algae or other vegetation. It has no other special dietary needs.