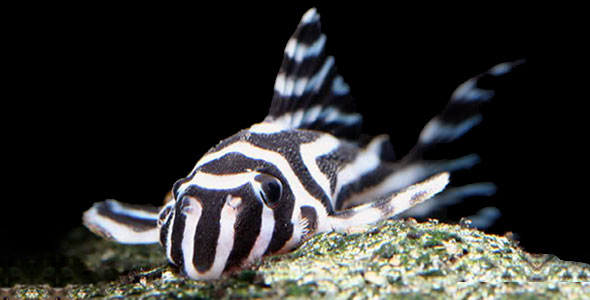 Looking like the dinosaur in your aquarium, the Plecostomus, or sucker fish, they make a useful and friendly addition to any tank. Sadly, however, the Plecostomus is not a dinosaur at all, but an armor-plated catfish. Generally peaceful, the Plecostomus is a nocturnal fish that prefers to indulge in active feeding at night while spending the day latched onto plants, rocks, and the side of the tank. A very useful fish, the Plecostomus pays for its keep by eating up algae that may gather on decorations, tank walls, and plants. Though they can be purchased as small fish just a couple inches in length, a Plecostomus can quickly out-grow a smaller aquarium. Their mouths are located beneath their heads, making it easy for them to latch-on to the sides of the tank. Because of the scraping, sucker action of their mouths as they remove algae from the walls of tanks, plexiglass tanks are not recommended as they can be damaged.

Zebra Pleco – As its name would suggest, the Zebra Pleco is a stunningly black and white stripped fish, though the coloring is perhaps less for looks and more for camouflage as these fish love to bury beneath the rocks or hide amongst aquarium plants.

Suckermouth – Most commonly seen in pet stores, the Suckermouth Plecostomus is a dark brown bodied fish with even darker spots. They are easy to find in pet stores and make a wonderful, if shy, addition to any fish tank.

Though Plecostomus are amongst the most common catfish chosen for home aquariums, few owners are aware of how truly huge they can grow if given the space. In fact, even in a small tank they will continue to grow, though they are less likely to reach their reported length of two feet. Small tanks, however, may lead to bad health and early death so it is recommended that they be kept in a tank larger than 40 gallons. They can be kept in tanks with a variety of fish, though it is not recommended that they be kept with goldfish as the two species have vastly different temperature requirements and some Plecostomus will suck on goldfish, removing the protective slime from their bodies.

Feeding a Plecostomus is fairly easy. They are omnivores in the wild, but when kept in a tank will happily feed off flake food and algae. Owners should not, however, rely on the built-up algae in the tank to fulfill the dietary needs of their Plecos. Algae wafers and pieces of fruit and vegetables should be added to the tank as well.