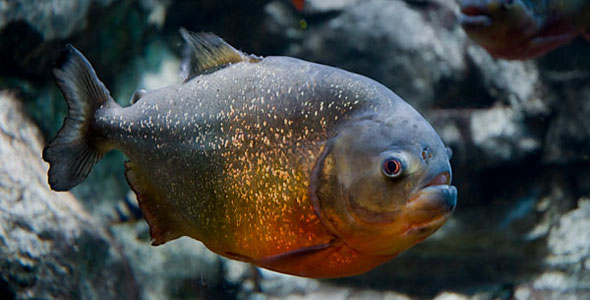 The Piranha is a fish for film, with Hollywood taking great joy in releasing films that show the fish as a terrifying, man-eating horror of South American rivers. Freshwater aquarists, however, know that this fish can be an interesting challenge as they require careful monitoring, regular feeding, and excellent tank maintenance. A medium-sized fish, they will grow no more than ten inches in captivity. It may be difficult to find Piranhas, however, as they are illegal in many parts of the United States, so be sure you research local and state ordinances to see if you are allowed to own one. A schooling fish, Piranhas engage in frenzied feeding and a school can devour prey within seconds. While raising Piranhas outside of the school can help to lower aggression, a Piranha raised in isolation cannot be added to a school at a later date.

How They Got Their Reputation:

Piranhas are often portrayed as crazed, schooling fish that will rip the flesh from the bones of a full grown cow within minutes. While this is based somewhat on truth, it is a great exaggeration. The myth was started when President Theodore Roosevelt visited a village in Brazil while on a hunting trip. Aware of his reputation for being an adventure-loving individual, members of the village starved a group of Piranhas and dumped them into a small, closed off tributary of water. A cow was then thrown into the water full of starving fish, which devoured it whole, leaving only the bones. President Roosevelt was quite impressed and made mention of the fish in his book “Through the Brazilian Wilderness”, portraying them as fierce and crazed animals that often mutilated careless swimmers and decimated the wounded.

It is not recommended that you keep Piranhas with other fish. If you find you cannot keep Piranhas, rehome them through a reputable source such as an aquarium store, zoo, or hobby club. Do NOT release Piranhas into local waterways. Piranhas are fairly large and should be kept in larger tanks with an excellent filtration system as they produce high amounts of waste that can raise ammonia levels quickly. Tanks should be densely planted.

Piranhas are carnivores and have a preference for live food. Feeder fish such as goldfish and minnows are excellent choices, as are earthworms. If fresh food is not an option, chopped fish and beef heart are also suitable. Avoid feeding your Piranhas by hand as they may accidently bite a finger and leave a serious wound.