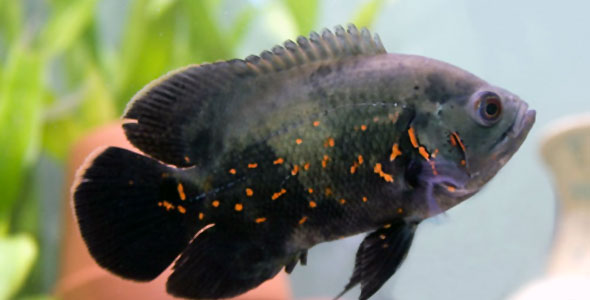 A giant for the home, freshwater aquarium, Oscars are a popular and easy-going fish that many tank owners are thrilled to add to their community. These natives of the Amazon can grow up to sixteen inches and live for fifteen years when provided with an ideal home. Easy to raise, it is recommended that potential owners start with young fish about four inches large. Owners should bear in mind that the Oscar will quickly outgrow a smaller tank. In fact, they can outgrown a thirty gallon tank within a year and are most comfortable in tanks larger than 100 gallons. It is important to bear this in mind! Though they are generally passive, when more than one Oscar is kept in a tank the weaker will be bullied. A common saying amongst Oscar owners is “keep one Oscar or several, but never a couple.” The more Oscars in your tank, the happier the weak ones will be, as the bullying will be divided amongst the group rather than directed at one individual. However, it is important to remember that the same space requirements remain. If you have many Oscars you will need a tank that can support them.

Albino Tiger – White and orange pattern this big, beautiful fish. There is no set pattern that this fish will display. In fact, some fish may show intricate patterns of orange and others only small little spots.

Red – A solid red body outlined in black describes the Red Oscar well. The Red Oscar is a more aggressive Oscar and should be kept alone or in groups of three or more.

Tiger Red – A beautiful labyrinth of red and black adorns the Tiger Red Oscar. The pattern can be made of small lines, splotches, stripes, spots, or any combination.

The greatest consideration when deciding on an Oscar is its size. Not only are tank space requirements a concern, but landscaping and the size of co-inhabitants must also be considered. When landscaping a tank, it is important that aquarium owners understand that, perhaps because of their large size, Oscars are somewhat clumsy and destructive. They will easily knock over anything that isn’t carefully and sturdily held down. Fallen rocks and decorations can be a dangerous hazard in an aquarium, as they can topple onto smaller fish and cause scratches and injuries that cannot easily be repaired. It is also important that aquarium owners keep like-sized fish. Anything that is small enough to fit in the mouth of an Oscar will probably become breakfast. Oscars are otherwise very easy to handle and have a fairly easy-going personality around most fish. Despite their size they are easily bullied by aggressive fish that will take advantage of their gentle personality and nip at fins. Oscars do best in warmer water between 76-80˚F, with a slightly acidic pH of 6.5-7.5.

Oscars are all-opportunity omnivores. They will eat everything from worms and crickets to bits of fruit. In their natural habitat, anything that falls into the water and is edible is eaten. In captivity, they prefer live food including fish earthworms, crickets, and brine shrimp for smaller Oscars. If flake food is started at a young age it can be continued into adulthood. It is significantly more difficult to re-train an older Oscar to accept flake or pellet food. Oscars are well known for their tendency to over-eat and aquarium owners should not give in to the temptation to feed them every time they walk by the tank. Oscars are excellent at begging.