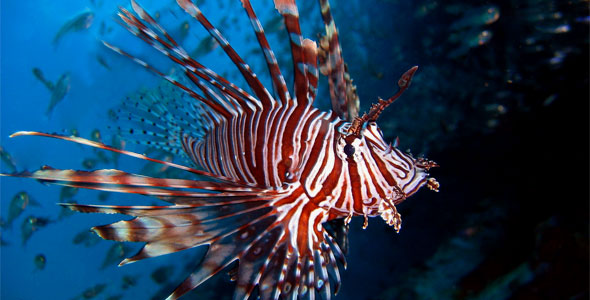 One of the most beautiful, and most deadly, fish in the oceans, the Scorpionfish or Lionfish is highly prized in a saltwater aquarium, though they are not for beginning enthusiasts. Scorpionfish are very hardy, easy to care for once in your tank, and fairly long-lived. Commonly called Lionfish, they display hollow spines on their fins that are long, flowing, and appear to encircle the body of the fish similar to the mane of a lion. It is through these spines that they release venom when frightened or disturbed. Lionfish are predominantly nocturnal, hiding in rocks and crevices during the day and slipping out at night to swim about. Aquarium owners may want to install special lighting to help them observe these fish in their nightlife antics. Lionfish prefer to hover, motionless, on the lip of a reef while they wait for their dinner to swim by.

Black or Volitans – Reaching lengths of up to sixteen inches, this staggering beauty is one of the more easy-going Lionfish available for aquariums. Black and white or red and white stripped, it presents a stunning picture. Dorsal and tail spines are all separated, giving it a free-flowing and expansive appearance.

Red – Very similar in appearance to the Black or Volitans Lionfish, the Red Lionfish is easily distinguished as it lacks what appear to be antennae over the eyes, instead presenting a smooth forehead that stretches back into the dorsal spines.

Antennata – Somewhat unique amongst Lionfish in appearance, the Antennata Lionfish has what appear to be thin spines, rather than flowing fins, extending from the back and tail. Its appearance is significantly pricklier than that of other Lionfish, but no less beautiful.

Shortfin – Growing only to seven or eight inches, the Shortfin makes a stunning and eye catching addition to any marine aquarium. While the larger varieties of Lionfish have expansive and individual spines, the Shortfin has connected and banded fins that mimic the appearance of a flaring Flamenco dancer’s skirt.

Zebra – Another smaller Lionfish, the Zebra Lionfish has a pale pink body decorated with reddish brown stripes. Similar to the Shortfin in appearance, the side fins are solid and somewhat opalescent in appearance.

Fu-Manchu – Another dwarf variety, the Fu-Manchu Lionfish has short dorsal and tail fins, with connected and flowing side fins. It likely received its name from the two downward curling antennae extending from each side of its mouth, giving the appearance of a man with a fu-manchu.

The Lionfish is a highly prized addition to any tank, but they require a fair amount of swimming room in order to be happy. Full sized varieties, such as the Black and Red, require a tank of at least 75 gallons, while the Dwarf varieties can be happy in one 30-50 gallons in size. Because these fish are nocturnal, it is important that they be housed in tanks that provide nooks and crannies in which these large fish can find shelter. Likewise, they also must have swimming room when it is time for them to begin “hunting”. Additionally, the Lionfish cannot be housed with fish equal to or smaller in size or with ornamental shrimp or crabs as they will eat them quite happily. Lionfish may be cautiously housed together, however they may fight. Owners should be careful when housing Lionfish and Triggerfish as Triggerfish will nip off the spines before killing the Lionfish. Dwarf Lionfish and regular sized Lionfish should not be housed together.

What to do if you are stung by your Lionfish:

It happens to even the most experienced Lionfish owners, but potential owners should be aware of what to do should something go amiss with your fish. Once you are stung, immediately place the wounded body part in very hot, but not scalding, water for twenty to thirty minutes. DO NOT USE BOILING WATER. Lionfish venom can be denatured or destroyed by heat, preventing it from spreading into the bloodstream and decreases the severity of its effects. If pain lingers or worsens after the hot water treatment, visit your doctor immediately.

Lionfish are carnivores and prefer live food to frozen or freeze dried. Brine shrimp, beef heart, clam or other small fish are ideal. It is important for owners to know that Lionfish have a tendency to over-eat, so it is recommended that they be fed a few smaller morsels as opposed to one big chunk. They will eat to the point of regurgitating their food because there isn’t any room left in their stomachs and have been known to eat themselves to death if allowed.