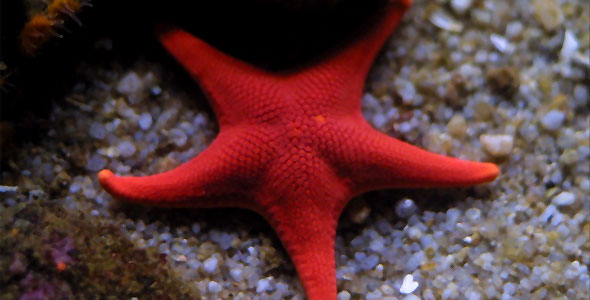 While starfish are not a novice addition to the marine aquarium, some sea stars require significantly more effort for the aquarist and are not to be attempted by novice or intermediate marine aquarists. Remember, all starfish are intolerant of copper-based medications and will die if these are added to the water.

The following starfish have special tank needs or they will not thrive.

Red Knob Sea Star – Also known as the Red Spine, African, or Red-knobbed Sea star, this starfish requires a large aquarium with significant numbers of LIVE rock. While younger specimens will exist on algae, once they grow older they lose their reef compatibility and will eat soft coral, clams, other starfish, and other invertebrates. This sea star has a grey body with red stripes and knobs. These starfish require that a diet of chopped clams, fish, shrimp, or squid be fed once a week.

Red Sea Star – A solid red with tiny black spots, the Red Sea Star requires a large tank. It will not survive in a tank that is not considered mature. They live predominantly off algae and are active during the daylight hours rather than at night. Because of their predilection for algae, if there is not enough growth in the tank, their diet must be supplemented with flake foods and small pieces of meat.

Blue and Pink Sea Star – A beautiful addition to the tank, the Blue and Pink Sea Star is salmon pink and periwinkle blue with bumps along the arms. It is highly active and mobile, sifting the sands of the tank as it searches for food. It requires a thick, sandy bottom of several inches. It is critically important that you keep this starfish feeding; if it runs out of food it will burrow beneath the sand and starve to death. Inject finely chopped shrimp and fish meat, clam meat, or invertebrate food into the sand where it can search for it.

Blue Linckia Sea Star – Bringing a stunning blue to your tank, this starfish is likely to become a focal point for your tank. They prefer lots of bright light in adulthood, hiding in caves as juveniles. As adults they will likely clamp onto the walls of the tank and wave two arms in the water to catch microbes for dinner. It is critically important that you carefully monitor your sea star for the small parasitic snail Thyca crystallina.

Sand Sifting Sea Star – Though at quick glance it appears drab, the softer patterns of the Sand Sifting Sea Star make it a soothing addition to the marine aquarium. They are effective cleaners and require a thick substrate of several inches. It is critically important that you ensure this sea star has enough food or it will bury itself in the sand and starve to death. Inject chopped up fish meat, shrimp meat, or clam meat into the dirt.

Chocolate Chip Sea Star – Resembling a cookie-cut chocolate chip cookie, this sea star is a bit of a challenge. It is highly intolerant to changes in nitrate levels as well as being completely reef-incompatible as it will eat corals, sponges, clams, and other starfish. It is also only appropriate for exceptionally large tanks as it can grow to be over a foot wide. It will happily eat a diet of finely chopped squid, clam, or shrimp.

Knobby Fancy Brittle Sea Star – Though this starfish is fairly easy to care for, it must be handled with extreme caution. It possesses a toxic mucus which can cause paralysis. Always use extreme caution when handling.

Yellow Fancy Brittle Sea Star – This is a relatively easy to care for species, however it does best when fed zooplankton, which can be difficult to find.

All starfish should be added to the aquarium using the Drip-Acclimation method.

Begin by floating your new addition in its sealed bag in your aquarium water for 15 minutes so that it can acclimate to the new temperature. Tilt the bucket slightly so that it is at an angle and carefully pour the water and starfish into the bucket. DO NOT expose the starfish to the air. This is critically important as sudden exposure to air during this process can kill your starfish! Tie a couple loose knots in your tubing and then, using the tubing, run a siphoned drip line into the bucket from the aquarium. Watch the flow of water; you want a drop speed of 2-4 drops per second. Watch the water level. When it has doubled in volume, remove half and begin dripping water in again until it has doubled once more. Once this is finished, you can release your starfish into the tank.