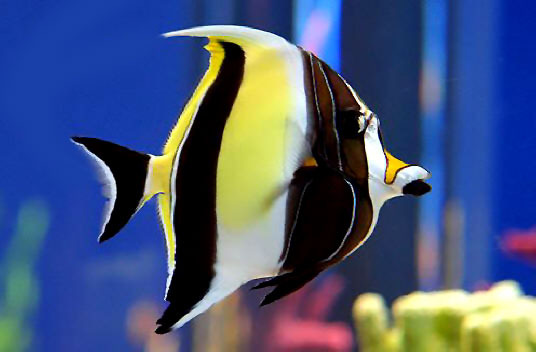 One of the most sought after and difficult fish to keep, the Moorish Idol, is not for everyone, though everyone seems to want one. Brightly colored, the Moorish Idol brings a unique look to your tank but are not for novice aquarium keepers. This fish is extremely difficult to care for and they rarely last more than a couple years even in tanks kept by expert aquarists. The fish received its name from the Moors in Africa who believed the fish was a bringer of happiness. Moorish Idols have a disk-like body covered in black and white stripes that are highlighted in yellow. Though their fins are relatively small, the dorsal fin extends over the body in an elongated and trailing sickle-like crest known as a philomantis extension. They also have a long nose that ends in a small mouth with many bristle-like teeth. They prefer shallow waters and may swim in small schools- one male to a few females as males will become aggressive.

Alternates for the Aquarium:

Because the Moorish Idol is so difficult to maintain in captivity, aquarists have explored other, similarly colored alternatives that survive better in captivity. All the butterflyfish in the genus Heniochus are acceptable replacements, including the Pennant Coralfish, Threeband Pennantfish, and the False Moorish Idol. They are similar in appearance but are far less needy in their tank requirements and dietary needs.

Moorish Idols have strict aquarium requirements. Despite their relatively small size, they must be kept in tanks of more than 100 gallons as they are voracious eaters and are notorious for their destructive capabilities. Water temperature should be kept between 78-84˚F, pH between 8.2 and 8.6, and the specific gravity between 1.020 and 1.023. Quarantining of Moorish Idols is highly recommended as it gives new owners a chance to see how they adapt to the new aquarium and how sensitive and picky the individual fish will be. Moorish Idols also require lots of light.

Moorish Idols can be considered down-right snobby when it comes to food. If it’s not exactly what they want when they’re hungry, they’ll starve rather than eat it. They must be fed live foods such as brine shrimp and vegetables such as fresh algae. Though they can be fed frozen food, live is best. Additionally, be sure to ask the pet store staff what they feed their Moorish Idols and purchase some of the same food to take home with you. This will help provide a sense of stability and normalcy for the fish, making the stress of rehoming and travel easier.