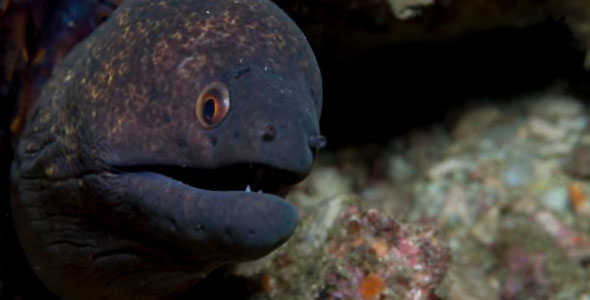 While eels, like snakes, are not for everyone, for some they are an awesome and totally cool addition to a marine tank. Be warned however, they are not recommended for the community tank. An eel will happily eat every fish in the tank if it should get hungry. Nocturnal by nature, eels will make burrows in caves and holes along the reef where they can happily snatch anything drifting by. Bear in mind that though they may go several weeks without showing an interest in food, when they do your whole community can be at risk. Even mollusks aren’t safe as some eels have jaws strong enough to crush shells.

Many eel owners feed their eels by hand. Though this is fun, it is also incredibly dangerous. Moray Eels have strong jaws capable of biting off the fingers of an unsuspecting feeder and since they identify food by smell rather than sight, a bite is purely accidental. Additionally, because of the teeth formation and bite mechanism of the eel, they cannot release their grip on their prey, even in death, and must be manually pried off any fingers or hands they have latched onto.

Common Moray – Long and green, the common Moray is probably the most recognizable eel. Though it is sold often at a short 8 inches, this eel can grow to be thirty inches in captivity and does best in a tank of about 100 gallons (or more). These eels can be kept with other fish, as long as their tank mates are not bite-sized (or won’t become bite-sized as the Moray grows).

Chainlink Moray – Spotted, with patterns resembling those of snakes, the Chainlink Moray Eel is a monster in the aquarium. Growing up to five feet even in captivity, this eel requires a tank of at least two hundred gallons.

Leopard Eel- Stunningly patterned, the Leopard Eel seems to wear the skin of the animal whose name it bears. They can reach lengths of 30 inches and should not be kept in a tank smaller than 100 gallons, but are fairly easy-going and enjoyable to care for.

Zebra Eel – Truly stunning, the Zebra Eel brings to mind a massive corn snake as it writhes its massive body through the waters. As its name suggests, the Zebra Eel is covered in reddish-dark brown and white vertical stripes. Easy to keep, this is a very popular eel amongst aquarists. It grows to about forty inches in captivity and requires a tank of at least 100 gallons.

The greatest concerns when caring for eels is providing hiding places and homes that are big enough when they reach their full adult size. Eels prefer to swim along the bottom of the tank and love large caves and overhangs that they can back into, poking their heads out to snatch passers-by for dinner. Tank water should be kept warmish, between 74 and 79˚F. Though it is not recommended, eels can be kept with other fish as long as the fish are not, and will not become, bite-sized.

Eels are carnivores and prefer chopped fish or shrimp. For a special treat, consider feeding your eel some squid or calamari. Train your eel to eat by placing food in long tweezers and then lowering it into the tank in front of the eel. Eventually it will learn the smell of its food and you can just toss the food in to them. Chainlink Eels are the pickiest eaters and may require some time spent figuring out what they like best. Zebra Eels have a strong preference for crab meat.