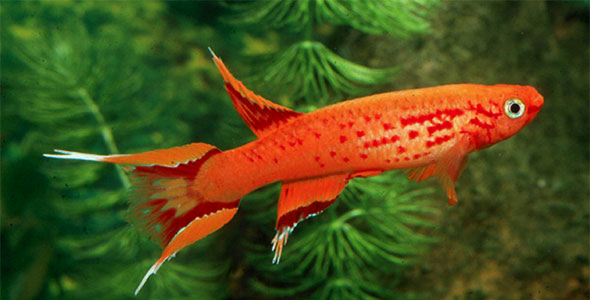 Some of the brightest and most beautiful fresh water fish around would be the Killifish. Beloved for their brilliant colors and designs, these small fish have the largest fan clubs and hobby groups in the world. They are exceptionally easy to keep, with no special attention needs and easy to breed. When Killifish breed, they lay their eggs in small pools that evaporate. These eggs lay dormant until the return of the waters which allows Killifish enthusiasts to send the dormant eggs to one another in the mail. Killifish range in size from half an inch to six inches and do well in pairs or small harems. Because of their size, you can have a pair of Killi’s in a tank as small as five gallons. Despite their hardiness and easiness to keep, finding Killifish can be difficult and your best bet is often to join a Killifish enthusiasts group. They do not do well in crowded tanks, so fish stores rarely carry them.

The best species for aquariums are known by their Latin names. The common names for these fish tend to be decided by the local breeders and hobbyists, which means that a group in one area may call a fish one name while another group will call the same fish something else.

Aphyosemion – A solid orange fish, spectacularly decorated. The body has darker red-orange spots while the fins are trimmed in red and edged in white. The tail fades from the orange of the body into a sky blue. It is edged in white and yellow with red-orange streaks.

Epiplatys – A fish that appears translucent, Epiplatys are banded in a pale black with bright blue gills. The fins are highlighted in red while the tail has a solid red streak down the middle that is framed by thin black lines.

Rivulus – The Rivulus is a stunning specimen. The first thing to grab your attention is its electric blue belly contrasted by its orange body and fins. The colors of the body are somewhat prismatic and present less of a solid contrast with the blue until it reaches the fins.

Killifish are most sensitive to water quality. They do not like a lot of motion in the tank, so the best filtration system is a small box filter. However, it is important that nitrates and ammonia are kept under tight control as these can quickly sicken a Killifish. Otherwise, they like water between 68-75˚F with neutral pH. It is critically important to thoroughly de-chlorinate water before changing. Also, be careful to provide your Killifish with a darker tank as they do not thrive in constant, direct lighting.

Killifish love to eat and will happily show it. They will eat dried food, but are happiest with live food. Bloodworms, insect larvae and bring shrimp are favorites.