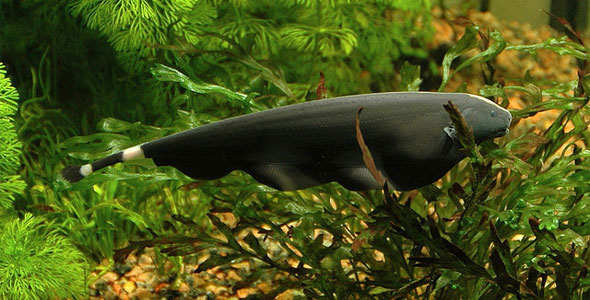 Related to the electric eel, Knifefish are long, thin fish with no dorsal or pectoral fins. They resemble the blade of a knife, with an undulating anal fin that stretches nearly the entire length of the body. They are found exclusively in fresh water and are an excellent addition to expert aquariums. Nocturnal, they provide evening entertainment, though special lighting may be necessary to highlight their activity in the darker hours. The most interesting aspect of the Knifefish is that they use electricity constantly, producing electric fields that help them navigate and communicate, as well as to find their preferred food. In most Knifefish this electricity is formed by muscle cells; it may be pulse-like or continuous. Those fish that generate electricity continuously generate it day and night for their entire lives. Each species generates the electricity in a special combination of waveform, duration, amplitude, phase and frequency unique to their species. This discharge is too weak to cause harm to other fish. This is a peaceful fish, aggressive only during meal times. However, because it is a carnivore, it may eat smaller tank mates.

Black Ghost – A stunning addition to the aquarium, this fish slips through the waters like a shadow. It is a solid black in body, with tiny, beady eyes. The base of the tail, however, has two white splotches.

Clown – Large and silver bodied, the Clown Knifefish has a series of black circles outlined in bright yellow that run along its side. These spots may be in a smaller series that are widely spaced, or a longer series of touching spots. Each fish is different.

Royal – The Royal Knifefish has a silver body covered in small black spots. Some of these spots may be larger than others or connected to make a small stripe.

African – The African Knifefish can be considered plain, but it has the simplistic beauty of some of the more common fresh-water sporting fish. Like the Rainbow trout, the side scales shimmer, giving the illusion of a rainbow of colors as the light reflects off it.

Knifefish are carnivores, but they are not picky eaters. Most will happily survive on flakes or pellets. However, a nice treat is the addition of beef heart or small feeder fish. Fresh or frozen meat are also appreciated.