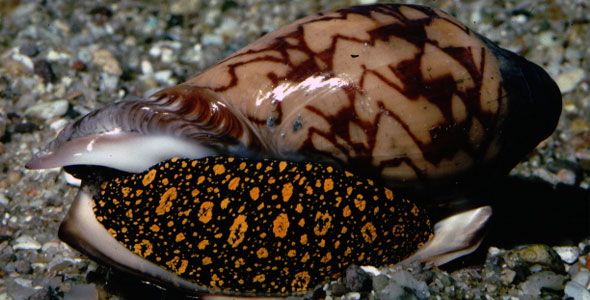 These snails have special needs that may make them unsuitable for beginning aquarists. Like all snails, these bring their “A” game to the tank cleaning crew team and will help to keep your tank in peak condition. Snails bring bright color, unique shapes, and even some interesting personality to your tank.

These snails require additional calcium to be provided as they use calcium to build up their shells. This allows them to create unique shapes that will dazzle the eye.

Chestnut Turbo Snail – Elegant yet highly functional, the Chestnut Turbo Snail brings its decorated, burnt-orange shell and diligent personality to your tank. Peaceful and useful, it can often be found cleaning the deep crevices and hidey-holes of the reef as well as the glass of the tank. They are herbivores and should have their diet supplemented by dried seaweed if there are not enough algae available.

Turban Snail – A large-ish powerhouse of a snail, the Turban Snail brings its interesting shell and superb appetite to your tank. The shell spirals upwards and is covered in small bumps with fading beige-to green coloring that ends in a white and black spotted foot. It may spawn in your tank and is an herbivore; supplement with dried seaweed if algae are not present.

Zebra Striped Turbo – While most turbo snails have a solid-colored shell, the Zebra Stripped Turbo Snail has a banded black and light brown shell. It brings the voracious appetite standard of the species and will need to have its herbivorous diet supplemented with dried seaweed if no algae are present.

Abalones – Tear-shaped and known for its iridescent interior, this species is nocturnal and requires hiding places to lodge in during the daylight hours. Be careful trying to move it as its foot will attach very firmly. It is an herbivore and should have its diet supplemented with dried seaweed, blanched lettuce, and spirulina tablets.

Chestnut Cowrie – Also known as the Date Cowrie because of the date or fig like markings on its back. It has an egg-shaped shell and hails from the cooler waters of the Pacific Ocean off the California coast. They do best in waters around 60˚F and are nocturnal. Though it is largely an herbivore, it may begin attacking sponges and soft corals as it ages. Be sure to keep it well fed and supplement its diet with dried seaweed and tablets or flake foods that can be eaten off the bottom of the tank.

Margarita Snail – Highly sought after for its voracious appetite, it is also non-venomous, reef-safe, and peaceful. It has a brown body and turban-like shell and grows to be about one inch. It should be kept in cooler waters, or certainly in water no warmer than 78˚F. Supplement their herbivorous diet with dried seaweed wrapped around a rock or hung from an algae clip.

Bumblebee Snail – Known for their small size and brilliant coloring, the Bumblebee Snail brings big benefits to the tank as they eat detritus, meaty foods, and decomposing organics. In addition, they burrow into the substrate and eat worms while aerating the sand. They have a voracious appetite and must be kept well fed, otherwise they will turn on other snails or anything else they can eat. Bumblebee Snails are carnivores and should be fed meaty foods such as mysis shrimp, finely chopped brine shrimp, or other frozen foods.

Astraea Snails – Beautiful to behold, both the Spiny Star and Conehead bring brilliant shape and color to the aquarium. They are dedicated cleaners that will tackle even the most difficult algae. However, the Astraea Snails require some babysitting. If they fall over they may not be able to right themselves and this leaves them vulnerable to anyone who would like to become a predator. They are herbivores and should have their diet supplemented with blanched lettuce or spinach and vegetable-based tablets.

All snails, like most invertebrates, are intolerant of copper-based medications. In addition, they are highly intolerant to changes in water condition and should be added to the tank only after Drip-based Acclimation.