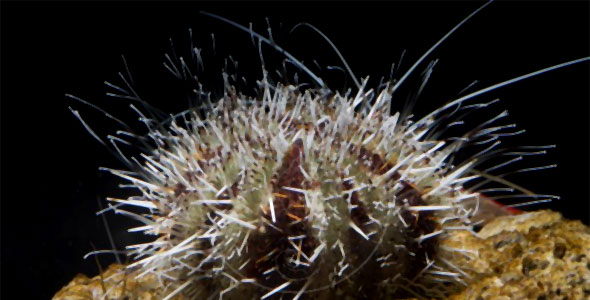 Urchins are one of the easier invertebrates to add to the aquarium. They are semi-hardy, not overly aggressive, and tend to be left alone by their fishy companions. Some, however, have slightly more advanced needs and owning them should not be attempted by novice or intermediate aquarists. Remember, most invertebrates are completely intolerant of copper based medications and will die if these are introduced to the water. Urchins are also very intolerant of poor water conditions, but thankfully are also something of an early warning sign before poor water destroys your tank. If your urchin loses its spines, it means that your water quality is very poor.

These urchins are known for camouflage or accident destruction. It is important that you make sure that rocks and corals are well cemented in your tank so that these urchins don’t knock them over in their attempts to get under cover.

Hairy Pincushion Urchin – Also known as the Sea Egg and the Priest-Hat, this urchin is known for camouflaging itself with items found on the sea floor such as rocks and sponges or shells and algae. In its natural coloring it is red, purple, white, or black with double rows of white or red spines. They are ideal for tanks with a filamentous algae problem. If sufficient algae are not available it should be fed dried seaweed.

Pencil Urchin – Easily recognized by its thick, pencil like spines, the Pencil urchin makes an interesting picture. You should never try to pry this urchin out of its hiding place as the spines will break before it lets go. It likes to hide in rocks and crevices and can accidently destroy formations as it forages for food. Supplement this urchin’s diet with dried seaweed and finely chopped fish or shrimp meat.

Pincushion Urchin – This spiky addition tends to be shy, burrowing itself beneath rocks and corals to hide during the daylight hours. Certain varieties can grow to be quite large and this should be kept under consideration. Reefs should be well cemented to prevent accidental damage. It requires lots of hiding places and live rock to feed off of. If there are insufficient algae, its diet should be supplemented with dried seaweed.

These urchins can be dangerous when handled, stinging incautious hands with venom like that of a bee sting. The are excellent additions to aquariums with aggressive fish as some will defend themselves against would-be attackers who will quickly learn and back off, leaving your urchin alone.

Blue Spot Longspine Urchin – Also known as the Radiating Hatpin Urchin, this interesting addition is a rust red and cream with small electric blue spots on its body. They are nocturnal, meaning they do all their foraging at night. When approached by aggressive fish, this urchin senses them and angles all its spines towards the offending fish.

Banded Longspine Urchin – With thick, pencil like spines capable of reaching 9 inches in length, the Banded Longspine Urchin is an interesting addition. It tends to hide in rocky crevices, so it is important that your reef is stable enough to survive the urchin cramming itself into a crevice. Juveniles are algae eaters but adults are carnivores and require meat. Feed this species by placing food near or on its spines.

Black Longspine Urchin – Long-spined and a deep, silky black, this urchin looks quite delicate but is very capable of protecting itself. When approached by aggressors, it will angle all its spines towards the aggressor until the aggressor backs down. They are algae eaters and ideal for tanks where other invertebrates would be eaten by aggressive tank-mates.