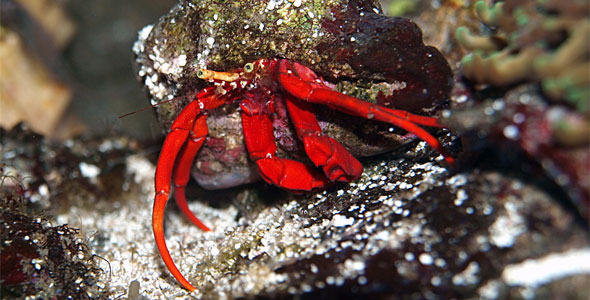 While some crabs are excellent for beginners, others have special needs that may make them unsuitable for beginning marine aquarists. From Hermit Crabs to Porcelain Crabs, each of their unique needs is what makes them a challenge for the aquarist. With good research and a little bit of confidence you can get these crabs to work well with your aquarium.

Hermit Crabs require that numerous empty shells of varying sizes be readily available in the aquarium. They do not grow their own shell, but steal the abandoned shells of others as they outgrow their old home. It is critically important that they have a new home ready to move into once they are ready.

Dwarf Red/ Yellow Tip – Brightly colored, any color variety will bring excitement to your tank. The Dwarf Red Tip has a bright red face and legs, the Yellow Tip has bright yellow bands on its green-black legs, and both are voracious herbivores. They will happily search through your substrate, rocks, and crevices in search of algae. If it appears they are not getting enough nutrition, their diet should be supplemented with dried seaweed.

Scarlet Reef – One of the most popular reef maintenance animals, the Scarlet Reef Hermit Crab is hardy, requires little care, and has an unquenchable appetite for algae and detritus. In addition, they are very peaceful, unlike other varieties. They have bright red legs with bright yellow faces. If they do not seem to be getting enough to eat, supplement their diet with dried seaweed.

Electric Orange – A native of Hawaii, this bright orange crab with stunning blue eyes grows to be a rather large two inches and happily eats algae, left over fish food, and detritus in the aquarium. It requires a well established tank with live rock to forage in. If it appears hungry, supplement with dried seaweed and meaty food such as mysis shrimp.

Electric Blue – Very rare and hard to find, the Electric Blue hails from the Marshall Islands and has electric blue and black legs with bright orange antennae. It is a smallish crab that isn’t above attacking a snail in order to get a new home if one isn’t readily available. It is completely reef safe and eats algae. If there are not enough algae in the tank it should be fed dried seaweed.

Dwarf Zebra – One of the most popular, it receives its name from its unique coloring; both claws and legs are black and white banded. It has long eyestalks that are blue and orange with bright blue eyes. It is a smallish crab with a large left claw that it uses to protect itself when attacked by a predator; the hermit crab will retreat into its shell and block the entrance with its enlarged claw. It eats detritus and algae and if it runs out of food, have its diet supplemented with dried seaweed.

Halloween – With its vibrant red and orange legs and claws it stands out against the rest of tank. Like other hermit crabs, it happily lives off detritus and algae and should be fed a supplemental diet of dried seaweed and mysis shrimp.

Special Needs – Tank Needs:
These crabs have special needs in their tank. Whether they require lots of rock or a specific companion, research into how best to provide for their needs may be necessary before purchase.

Emerald Crab – Though easy to care for, the Emerald Crab is quite shy and will remain a nocturnal hunter until it is comfortable in your aquarium. It requires a well-established tank with many hiding places. In addition, it is a voracious eater and must have its diet supplemented with dried seaweed and chopped meats such as fish or shrimp as well as a high quality fish food pellet. If it is not provided enough food it will begin eating corals, other invertebrates, and small fish.

Porcelain Anemone Crab – The Porcelain Anemone Crab must live with an anemone. They are quite peaceful but will get into a territorial dispute with Clownfish for possession of an anemone, and sadly, the Clownfish will most likely win. They eat plankton and mucus from the anemone and will require tablet foods be placed next to the anemone in order for them to be eaten.

Porcelain Crab – Brown and orange with bright blue spots, the Porcelain Crab is often found in pairs inside or under rocks. They require an aquarium with lots of live rock but are reef safe and will not harm coral, other invertebrates, or fish. Because they themselves are peaceful, do not keep them in an aquarium with potentially aggressive fish. They are carnivorous filter feeders and will need their diet supplemented with chopped meats such as fish and shrimp as well as foods designed for filter feeders.

Trapezia Pocillopora/ Acropora Crab – Also known as the Acro Crab, this species was once considered a pest found in the branches of Pocillopora and Acropora corals. The two share a symbiotic relationship and the addition of these crabs to your SPS corals may actually help you establish them. This crab WILL NOT survive without SPS coral.

Staghorn Hermit Crab – Also known as the Antler Hermit or Coralhouse Hermit, it is quite special in its needs. To begin with, it is best suited for biotope or deep sand bed tanks where they scavenge animal matter and algae. They have a shell covered with hydroids and bryozoans and are hardy tank companions themselves. Their shell, however, requires special care. Because these coral grow on the shell, they can tip the crab over and it will not be able to get up or protect itself. The corals must be fed live or prepared plankton while the crab can be fed dried seaweed if there are not enough algae present.

All crabs benefit from the drip- acclimation method and are unable to tolerate copper based medications.