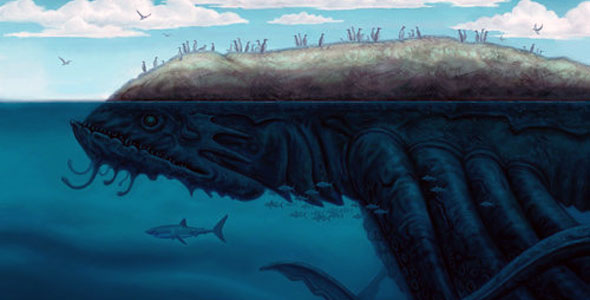 The sea has played an important roll in the cultures all around the world. Whether the water itself is the giver of life to the planet or contained within it are mythical creatures that mold and form our existence, the ocean and creatures within it have been pivotal in the formation of cultures and religions.

Hafgufa/ Lyngbakr –
These two names seem to describe the same peculiar phenomenon in the Greenland Sea. Hafgufa, though likely a vanishing island near an undersea volcano, is believed to be a beast that disguises itself as an island or pair of rocks that are rising from the sea. She belches and calls the fish to her. Once they had gathered into her mouth and belly, she would close her mouth and devour them. Considered to be the mother of all sea monsters, she is believed to feed on ANYTHING as long as she can catch it.

Lyngbakr, if not considered to be the same being as Hafgufa, is also believed to be a whale that disguises itself as an island covered in heather. When the crew of a passing ship stopped and landed on his back, he would sink into the sea and drown them.

Sisiutl –
One of the most powerful creatures in the mythology of the indigenous peoples of the Pacific Northwest Coast, Sisiutl is known as the god of warrior invincibility, a magic war-canoe, and the guardian of the house of the sky people and is often depicted as a two headed sea serpent or a snake with a human head and hands. He has the ability to transform into a canoe or a salmon and is capable of growing large enough to block off the waters of a bay,

Ogopogo –
Also known as Naitaka, Ogopogo is considered to be a sea monster of the serpent variety living in the Okanaga Lake of British Columbia. He has been reportedly seen by people since the 19th century and is believed to be 40-50 feet long. Because he is a sea serpent, his body is often described as loops visible above the water and may be a primitive serpentine whale similar to the Basilosaurus. On the flip side, however, because evidence of the beast is limited to undocumented sightings or blurry images on photos and film, it has been suggested that Ogopogo sightings are little more than sea otters and floating logs.

Namazu –
In a country riddled with earthquakes, it is not surprising that Japan’s ancient mythology has given the honor of causing earthquakes to a catfish. Namazu is a giant catfish guarded by the gog Kashima. He lives beneath the mud, restrained by a stone; however, when Kashima’s guard falls, Namazu will thrash and cause violent earthquakes. It is likely that a catfish was given this dubious honor because of the sensitivity catfish have to seismic tremors, making them something of an early warning system. They will become more active before a quake, letting their owners know that misfortune is about to befall them.

Makara –
A sea creature from Hindu mythology, the Makara is the vehicle of choice for the goddess Ganga and sea god Varuna. In addition, the Makara has the extra honor of being the insignia of the love god Kamadeva. He is often depicted as a half-animal, half-fish creature with a variety of combinations creating him, such as the tail of a fish with the head of an elephant, or the head of a crocodile, an elephant trunk made of fish scales, and a peacock tail. Ornaments depicting Makara are considered excellent gifts for brides and used commonly as bridal decorations.