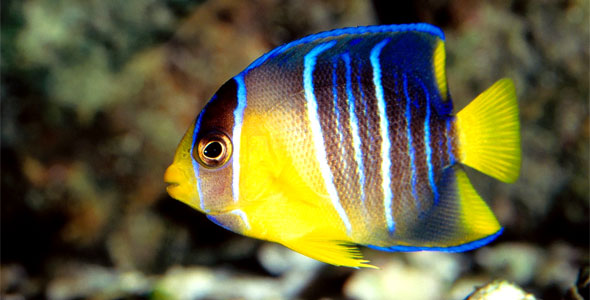 Marine Aquarists rarely have the opportunity to purchase and nurture fish that are tiny and could fit in a ten gallon tank. Some marine fish, however, go above and beyond the mark of a large fish and have special, extra large requirements thanks to their size and behaviors. Here are the top five “extra large” aquarium fish!

Angelfish
Size: Up to 16 Inches
Though they can be quite touchy at the start, once a full sized, saltwater Angelfish has become adapted to its new home it can be a long-term companion. Because of their 16 inch size, they should not be kept in tanks smaller than 75 gallons. It is not recommended that you have more than one Angelfish per tank as they are quite aggressive and territorial with one another. They can be challenging to keep in terms of diet; it is recommended that you begin them on live food in order to help them acclimate to the tank more quickly. Be careful adding them to a tank with invertebrates as they may view them as an easy snack.

Batfish
Size: Up to 18 Inches Tall
One of the most beautiful fish, the Batfish enters the largest fish list, not because of its length, but because of its height. While they are relatively short in length, the height of this fish can stretch over a foot! They may start small, two to four inches when first purchased, but they are fast growing and require a tank of at least 180 gallons, preferably from the start because of their quick growing. They are quite peaceful and hardy, preferring water temperatures around 76˚F with a pH between 8.1-8.4. It is important to bear in mind that Batfish require a tall tank of 180 gallons; height and depth are more important than length when considering them for your tank.

Eels
Size: Up to 3 Feet
Eels are not for everyone, what with their large size and peculiar features they may turn off a number of aquarists. Those that choose to purchase them, however, have added a unique and interesting fish to their tank. Because of their size they should be kept in a tank of about 300 gallons and regular feeding is imperative as they will happily eat their tank mates when hungry. Bear in mind that they do not eat constantly and will often go weeks without desiring food. Resist the urge to hand feed your eel! They do not locate food by sight but by smell, so once they have clamped down on what they believe is food it is nearly impossible to get them to let go. Even in death the jaw of the Moray eel remains locked, so be careful!

Rays
Size: Up to 3 Feet
While not all rays are acceptable for the tank, some can be if provided with enough room. For Round and Spotted Caribbean Stingrays, enough room is at least 180 gallons; Fiddler and Thornback Stingrays need at least 360 gallons to be maintained properly. They are a stunning and pleasing addition to the larger freshwater aquariums, however they have expensive dietary needs as they feed on shellfish and crabs in the wild.

Triggerfish
Size: Up to 20 Inches
Triggerfish are large, beautiful, and aggressive both towards other fish and humans. Curious and lively, they are not fish at all for beginners because of their tendency to be very aggressive. A single Triggerfish, though easy to care for, can destroy an entire reef community with its aggressive behaviors. They will eat anything that fits into their mouths and often things that are similar in size to themselves. Keep Triggers in a tank of at least 100 gallons if alone and with fish at least as large as they are in a significantly larger tank. They are highly territorial, especially when caring for eggs and fry.