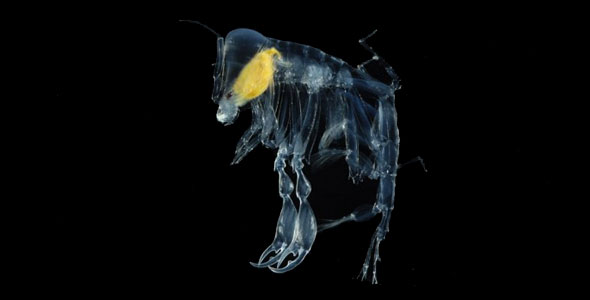 The ocean is home to numerous mysteries we have only begun to explore. Over the centuries of travel, species that were once identified and lost have been found again and captured in picture or on film. The documentary Planet Earth, put together by Discovery Channel, showcased some of the rare and unique creatures both on land and in the sea. Some, however, are so strange and unique that they deserve special recognition.

Chimaera
Often viewed as a monstrous creature made up of the parts of a number of different animals, it is no surprise that the Chimaera of the ocean has such a similar name. Also known as Ghost Sharks, Ratfish, Spookfish, and Rabbitfishes, these cartilaginous fish from the order Chimæriformes is one of the oldest groups of fish alive, likely related to sharks and confined to the deeper waters of the world. They prefer temperate zones and are found at depths as low as 8500 ft., rarely venturing higher than 660 ft. They grow to be about five feet in length including the long tail found in some species. Some species have an elongated snout that serves as a sensory organ for finding food. Though they resemble sharks with their long, soft bodies, they have only a single gill opening and traces of a third pair of limbs! There are currently 39 types of Chimaera in existence today divided into three families.

Phronima
Amphipods cover a wide number of crustaceans with no carapace found deep within the ocean. Their name refers to the differences in their legs; each set appears to be different in some way. They range in size from less than half an inch to 13 inches and happen to be scavengers. Of these, one of the newest to be recognized is the Phronima, a small amphipod that seems to resemble a cross between a lobster and a cricket. It has a small pair of claws and a humped back like a lobster, with long back legs and a head that resemble a cricket. The Phronima amphipod females will attack other invertebrates known as salps, eating out their insides so that only the hard shell remains. Taking over this exoskeleton, they will lay their eggs and propel the body through the water.

Mola Mola or Ocean Sunfish
The heaviest bony-fish in the ocean, the Mola Mola weighs in at a stunning 2200lbs. They are found predominantly in tropical waters and live almost entirely off jellyfish. Female Mola Mola produce more eggs than any other vertebrate and the fry hatch resembling tiny pufferfish. They have few natural predators, but are considered a delicacy in places such as Japan and Taiwan. Difficult to describe, the Mola Mola is large and thin. It appears to consist solely of a head and tail, lacking a defined “body,” with extended dorsal and anal fins. The pectoral fins are so small they are almost laughable. Very docile, Mola Mola get along quite well with divers and are only known to injure humans when leaping out of the water and landing on boats, knocking unsuspecting humans into the water. It is not uncommon to travel in tropical waters and discover a Mola Mola floating up at the surface of the water sunning itself. It is believed that they do this to “recharge” after spending some time in the darker waters of the ocean hunting jellyfish.

Blue-Ringed Octopus
Small, golf-ball sized, and deadly, the Blue-Ringed Octopus has enough venom in its small body to kill 26 adult humans in mere minutes. In addition, the bite is virtually painless, leaving victims unknowing until they suddenly cannot move or breathe. They inhabit tide pools found from Japan to Australia and are relatively docile until provoked when they will turn a bright yellow just before attacking! There is no anti-venon available for the blue-ringed octopus, and bites cause motor paralysis and respiratory arrest within moments of exposure. It is critically important that artificial respiration be started immediately. As long as artificial respiration is maintained and the paralyzed individual is kept as calm as possible, it is highly likely they will survive. It is critically important that artificial respiration is continued. Because of the nature of the poison, the victim can be fully aware of everything going on around them but unable to respond or breathe on their own. Do not give up respiration!

Pelican Eel
Also known as the Umbrella Mouth Gulper, this is a species of eel you are not likely to ever see in the wild. This is a deep sea fish with a mouth that can open wide enough to eat food significantly larger than itself. The lower jaw is pouch-like, giving it the pelican moniker. Despite its ability to each significantly larger foods, it appears to stick to small crustaceans. Its tail is whip-like and has an organ covered in tentacles that glow pink and bright red. It is assumed that this is used to lure food. It is found in tropical waters as far down as 26,000 ft.