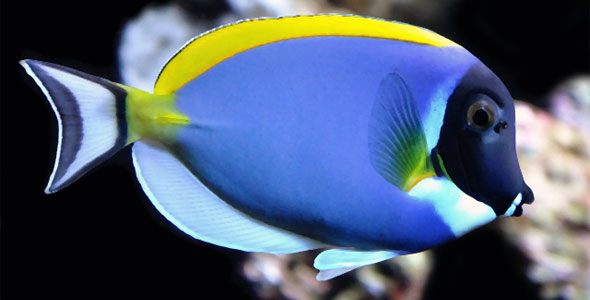 The Surgeonfish is famous, easily recognized by both children and adults as the quirky and clever Dory from Disney’s Finding Nemo. Lively and colorful, these fish are excellent for beginners and coral reef tanks. There are about 80 species of Surgeonfish (also known as Tang or Unicornfish). They sport a steeply sloped forehead, are oval shaped and thin. They owe their name to their defense mechanism in which thin, scalpel like spines will protrude from the base of the tail when the fish is threatened. Surgeonfish can be found in blue, yellow and green; in some cases their coloring will change as they mature. They tend to thrive in well kept aquariums, so it is important that potential owners be aware of the size of the fish (up to sixteen inches) when building their aquarium. Surgeonfish require lots and lots of open swimming room; space cannot be compromised when adding Surgeonfish to your aquarium. Surgeonfish are excellent for reef aquariums as they don’t bother the coral, instead preferring to eat algae.

Yellow Tang- A solidly yellow fish, the Zebrasoma flavescens thrives in captivity when given enough swimming space and proper food.

Blue Tang- Easily recognized as “Dory”, this blue fish sports black markings along its sides and a yellow tail. However, these fish do not start out a vibrant blue. Juveniles are a solid yellow that changes to a blue-ish purple and then finally to a blue once they have reached maturity.

Japanese Tang – Also known as a smooth headed unicornfish, this fish has striking markings against a relatively dull colored body. The grey or brown body is framed with bright yellow dorsal fin and belly streaks, two bright yellow dots at the base of the tail, and brightly colored lips. This is a hardy breed that does well in most aquariums, but does require protein as well as vegetation in its diet.

Powder-Blue Tang – The Acanthurus Leucosternon is not for novice fish keepers, but those who have successfully kept a tropical aquarium for a time may want to tackle this most beautiful fish. The body is a light blue, face black, and dorsal fin a bright yellow. These fish are extremely sensitive to cleanliness and highly aggressive. They are not for novice fish keepers.

Space, space, space: this is the number one requirement for owning Surgeonfish. These fish love to swim and have been known to injure themselves on rock and coral as they dart and zip throughout the tank. In addition, they love to perch above coral and so there must be enough space for them to perch above rocks and coral. They are sensitive to bacterial infections, especially when injured, and can easily contaminate an entire tank.

Surgeonfish are highly territorial and will attempt to dominate the entire tank if possible. They are aggressive during introduction to the tank and may start fights; moving coral and rocks will help fish establish their territory more easily. It is not recommended that owners purchase more than one Tang due to their territorial personalities, however, if two are purchased be sure they are introduced to the tank at the same time as this may reduce the tension somewhat.

Tank requirements are standard for a reef tank, with a pH of 8.3-9, warm temperatures, and good lighting and aeration.

Surgeonfish tend to prefer an all vegetation diet with lots of algae and vegetable matter. A vegetarian diet is absolutely necessary or your Surgeonfish will not survive. If your tank doesn’t have a lot of algae, they will happily eat finely chopped lettuce or spinach that has been blanched. Some species, such as the Japanese Tang, also prefer to have brine shrimp or flake food to provide some protein.