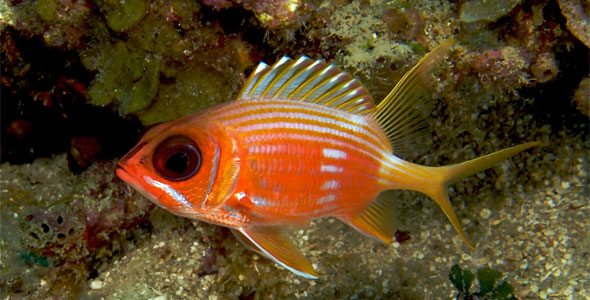 Squirrelfish are the night owls of the coral reef. Their notably big eyes, large mouths, and stout fin spines quickly catch the eye where their coloring might lead to them being overlooked as an addition to the marine aquarium. These fish prefer to be up and about at night, hiding in nooks and crevices within the reef during the daylight hours. Some aquarium owners may want to install special lighting to help them see these fish during their nocturnal activities. Like the Dragonet fish, Squirrelfish are often bullied and will run and hide rather than stand up to an aggressor. A bit of a newcomer to the marine aquarium scene, they were fairly unheard of until the advent of “themed” aquariums. Once aquarium enthusiasts began looking into nocturnal tanks, the Squirrelfish became an obvious choice.

Russet – This fish is a red color with white stripes and the characteristic large eyes. The fins also have the white on red appearance. They are not a schooling fish, preferring to swim alone.

While some species of the Squirrelfish are found at depths where the light doesn’t reach, the majority of the Squirrelfish sold in pet stores are reef roamers and easily adaptable to life in a marine aquarium. They prefer warmer waters, between 75-83˚F, and are fairly easy to care for. They are easily bullied by larger fish, aggressive fish, and nosey fish and will become distressed if they do not have places to go and hide. They tend to be non-aggressive and while they prefer to swim alone, it is possible to house more than one in the same aquarium. It is important that owners be aware that these fish will happily nibble on the invertebrates in your reef system.

Squirrelfish, and the related Soldierfish, do best on a diet of fresh or live shrimp, invertebrates, and other meaty foods. If you have trouble convincing your fish to eat, wait until they begin their nocturnal activities and attempt to entice them with live shrimp.