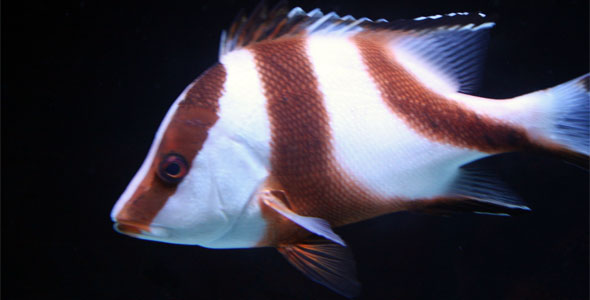 Predominantly nocturnal, large, and difficult to keep, the Snapper is not for everyone. Even in captivity this species of fish can grow larger than three feet in length, so the aquarist must be prepared for this and ready to provide adequate swimming room. They are a carnivorous and predatory fish that can eat their way through an entire community of smaller or equal sized fish. However, they are not overly aggressive and can be kept with other Snappers and larger fish in happy and peaceful schools. Despite the number of fish in the Snapper species, only a select few are suitable for aquarium life and these may still quickly outgrow a smaller tank.

Emperor – A stunning fish, the Emperor Snapper is white with deep, maroon stripes… Or a deep maroon with white stripes! Either way its beautiful fin designs and velvety colors make it an excellent addition to the tank. This is definitely a large fish, capable of growing up to three feet. They are not aggressive, however, unless they feel cramped, so be sure to give this fish a lot of swimming room.

Blue-lined – Bright yellow with small teal lines, this Snapper brings more than bright color to your tank; it brings its sunny disposition as well. Blue-lined Snappers love to school, so they will do best when surrounded by others of their own kind.

Threadfin – Though they could easily be mistaken for Blue-lined Snappers at first glance, the Threadfin Snapper has two important distinctions. First, the Threadfin Snapper has two golden bars that run vertically from just in front of the gills and around the head and from the top of one eye, over the head and to the top of the other eye. They also have a black spot on the base of the tail. They get their name from the other major distinction: two thread-like filaments that extend from the dorsal fins.

Snappers require a lot of space and a tank with fish of similar size. They are relatively unaggressive and will get along with almost anyone that can match them in size. They have no special water needs beyond those of a regular reef tank: warm water temperatures between 78-82˚F and a pH around 8.3.

Snappers have a voracious appetite and need to be fed a lot of food quite often. As carnivores they require lots of protein best supplied through brine shrimp, beef heart and chopped up fish. They will eat other things as well, such as vegetation, but their primary diet is meat. Flakes are suitable though not ideal.