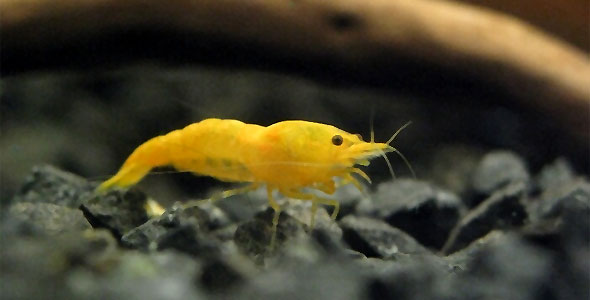 Though they are small, adding shrimp to your aquarium can bring major changes to how you do everything from feeding to medicating and monitoring your water. Some shrimp are not at all suitable for beginning marine aquarists as they have special needs, whether in diet or how they must be introduced to the tank. Some shrimp, though popular, are only suitable for nano-reef aquariums and should not be added to larger tanks. All shrimp are intolerant of copper based medications and will die if these or high levels of nitrates are found in your tanks. Additionally, they require iodine supplements to help them molt properly.

When most people consider owning a saltwater aquarium, they picture a tank big enough to cover a wall in their home. With modern day tank technology, however, it is possible to build a “nano-reef” aquarium that exists in tanks smaller than 30 gallons. Like all shrimp, those kept in a nano-reef require an iodine supplement to help encourage molting and are completely intolerant of copper based medications. They also require “drip acclimation” before being introduced fully to the new environment.

Yellow Line – This small, one inch shrimp is ideal for nano-reef aquariums. It is a clear bodied shrimp that is defined by a yellow line that reaches from nose to tail where it splits into a fan. A “cleaner” fish, it creates cleaning stations and then dances by the opening to announce that it is accepting new customers.

Bumble Bee – Though it is yellow and white striped, the Bumble Bee Shrimp resembles the buzzing bumblebee far less than it resembles a chubby caterpillar rumbling through the substrate of your nano-reef. Though this variety of shrimp usually feeds on the tube feet of animals such as starfish, it does not require them for survival.

Venus Anemone – Also known as the Glass Shrimp, the Venus Anemone is found living on anemones and corals where its translucent body and large white spots help it to blend in almost seamlessly. Their size and camouflage make them ideal for nano-reef tanks. They do best in tanks with anemones or tanks with many hiding places.

Shrimp that require Drip-Acclimation
Size: 2 1/2 Inches
These shrimp, in addition to those for nano-reef tanks, require something called drip-acclimation method. It is important that acclimation methods are NEVER rushed as they are critical in making sure that both your new additions and already established fish survive the transition. Be sure that you have a section of air-line tubing and your “aquarium use only” 3-5 gallon bucket before beginning.

The Drip-Acclimation Method:
Begin by floating your new addition, in its sealed bag, in your aquarium water for 15 minutes so that it can acclimate to the new temperature. Tilt the bucket slightly so that it is at an angle and carefully pour the water and shrimp into the bucket. DO NOT expose the shrimp to the air. This is critically important as sudden exposure to air during this process can kill your shrimp! Tie a couple loose knots in your tubing and then using the tubing, run a siphoned drip line into the bucket from the aquarium. Watch the flow of water; you want a drop speed of 2-4 drops per second. Watch the water level. When it has doubled in volume, remove half and begin dripping water in again until it has doubled once more. Once this is finished, you can release your shrimp into the tank.

Sexy Anemone – This shrimp receives is rather unique name because of the seductive swaying motions it makes while moving. It also resembles an anemone with a rust colored body decorated in large, white spots. Though it is a fast grower and frequent molter, it will not grow more than 1- 1 1/2 inches in length.

Scarlet Skunk – One of the “cleaner” shrimp, the Scarlet Skunk Shrimp receives its name because of its unique coloration. It has orange legs and sides and two bright red stripes separated by a white one running down its back. It should be kept in a tank with live rock or coral.

White Spot Anemone – Also known as the Glass Anemone Shrimp, they require a tank with anemones as they have a semi-symbiotic relationship. If anemones are not available it will make do with sea cucumbers. It stays nearby its host, shares food, and leaves only to molt when the anemone is likely to turn on the shrimp as it lacks its chemical camouflage. The body of this shrimp is translucent, with small black spots on the legs, large white spots on the body and small, mostly translucent red spots on the tail.

Harlequin – The Harlequin is a stunning shrimp, first described in 1852. It has a white body covered in red spots that are outlined in blue. The legs are white and blue banded and large, equally spotted claws exist simply for ornamental purposes. They are best kept in mated pairs. What makes them difficult for aquarists is their determinedly picky and rather pricy diet. They will only eat echinoderms such as starfish and a few types of urchins. This means that in order to keep Harlequin shrimp, you must provide it with starfish as a source of food.

With the exception of the Harlequin shrimp, all the shrimp mentioned here will happily scavenge debris, parasites and the like from the floor, reef, and bodies of the fish. Their diets should be supplemented, however, and all will happily eat small chunks of fish meat, brine shrimp, and other frozen or freeze dried fish foods.