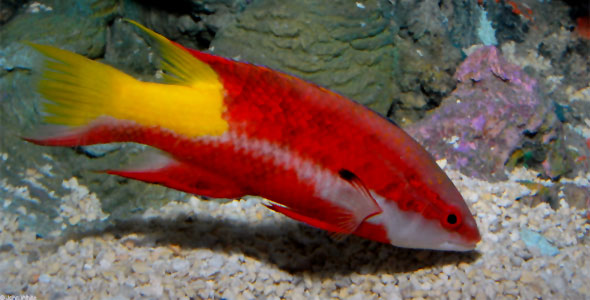 One in a number of land-animal named fish, the Hogfish gets its name from its pig-like snout and rooting behaviors that are similar to those of the land mammal. They are found predominantly in the waters off the Florida Keys and are a stunning addition to the aquarium, as well as being useful in maintaining the health of the coral in your reef aquarium. Hogfish are easy going and adapt well to tank life. They are hardy and have few needs. As sequential hermaphrodites, Hogfish will develop into their genders based on the pecking order with the most dominant fish becoming male. Hogfish are not overly small, nor are they extra large. Depending on size, however, they should be kept in a tank no smaller than 55 gallons and will do best in a tank 100 gallons or larger.

Yellow Candy/ Two Spot – One of the smaller Hogfish, the Yellow Candy or Two Spotted Hogfish is a bright yellow accented in pale red lines. It also has two spots: one up by the gills resembling an ear and one down by the base of the tail.

Cuban – Bright and colorful, the Cuban is excellent for novices. It is a bi-colored fish with the majority of the head and body being a vibrant red color, while the tail and small end portion of the body are a bright yellow.

Coral/ Eclipse – The best word to describe this fish is interesting. The head is a maroon color and the back half a soft, mellow yellow. The two halves are divided by a slanted black band. A bit of a bully, this fish is best kept in an aquarium with larger fish that it can’t push around.

Spanish – A bright and colorful fish, the Spanish Hogfish seems to be made up of all the colors of the rainbow. It seems to be a yellow fish that has been painted over a few times with pinks and blues.

Red Diana – A stunning and somewhat regal appearing fish, the Red Diana is a pink colored fish with an overlay of gold. It has large black spots outlined in red on the fins and tail.

All Hogfish prefer a tank with crevices and hiding places where they can go to be alone. They can be kept in a reef, with caution, but it is not recommended that they be kept with invertebrates as this is their primary food source and shrimps will be eaten.

Hogfish are carnivores and should be fed a high protein diet. Flake foods are okay, but it is best to feed your Hogfish a diet of shrimp or krill. Some will eat small amounts of fish meat.