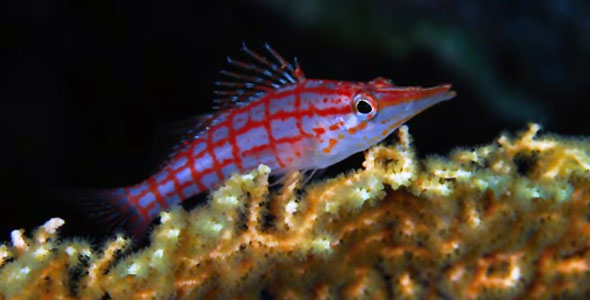 Though Hawkfish are not readily available in pet stores, their easy personalities, bright colors and quick acclimation to tank life make them highly sought after by aquarium enthusiasts. Though they are small fish, the Hawkfish receive their name because of their tendency to perch high up in coral and swoop down on unsuspecting prey. While they tend to be solitary, some will pair off and share a coral head. They have extremely long pectoral fins and will, on occasion, “walk” across the bottom of the tank with their fins. Relatively shy, be sure you provide your Hawkfish with lots of hiding places.

Long- nose – One of the more popular and sought after Hawkfish, the Long-nose Hawkfish resembles a Scottish tartan: white, yellow and orange form a pattern of plaid across its body. It receives its name from its long nose which it uses to hunt for food in coral crevices.

Freckled – The Freckled Hawkfish is a sunset colored fish. The head is a pale pink that darkens and fades into yellow and orange in the tail. It receives its name from the dark-colored spots that freckle its head.

Flame – The Flame Hawkfish resembles a burning ember. It is a bright, deep red with a black back and translucent orange fins.

Hawkfish readily and easily adapt to tank life. They do not require much space and tend to get along with everyone as long as they have hiding places. Water temperatures and pH should be kept at standard levels for a well-establish reef tank. The greatest concern when caring for Hawkfish is to make sure that ammonia and nitrate levels remain low and stable. Do not add Hawkfish to a new tank as they are highly sensitive to ammonia and nitrate.

Hawkfish are carnivores and prefer to hover at the top of a coral, swooping down to catch small fish and invertebrates. They will not take to flake food and prefer fresh food. However if live food is not available they will also happily eat chopped shellfish, shrimp or fish.