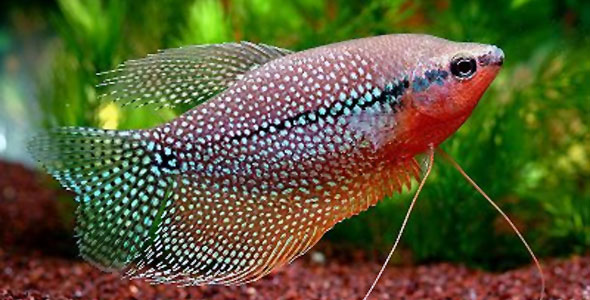 Gourami can almost be considered the ideal aquarium fish. Easy going, colorful and elegant, they make an excellent addition to any aquarium. Hailing from Asia like the Betta, this species has a couple of special similarities. Like Betta fish, Gourami create bubble nests when mating and have a special organ known as the labyrinth organ that helps them breathe oxygen from above the surface of the water. They are a medium sized fish with rays that extend from in front of their pelvic fins. Some species can grow to be quite large and potential owners should be sure that the variety they are planning to purchase will fit inside their tank. Gourami are generally non-aggressive and get along well with most tank inhabitants. However, caution should be used when adding Gourami to a tank with long, flowing fins as juvenile males have been known to spar with one another while developing and establishing tank territory and over-crowding can cause additional problems with aggression.

Breeding Gourami can be an interesting experience but does require a breeding tank. Provide the couple with a leaf or two, specifically with a preference for larger leaves. The male will then begin creating sticky bubbles and placing them on the underside of the leaf. The male and female then mate beneath the leaf and the fertilized eggs will rise up into the bubble nest. The female should be removed at this point, leaving the eggs to hatch within a week. Fry should be fed egg strained through cheesecloth to create pieces small enough for their mouths to eat.

The Gourami is one of the few freshwater fish that can match the saltwater species in spectacular coloring and patterns. Many will even display an iridescent shimmer when struck with light. Hybrids frequently appear in fish stores but most can be traced to the following to subfamilies.

Trichogaster – The Gourami found in this subfamily of the species are quite popular among freshwater aquarium enthusiasts. This genus includes brightly colored Gourami such as the Honey Gourami, the Thick-lipped Gourami, and the Dwarf Gourami.

Trichopodus – The larger of the two, these Gourami can grow over eight inches in length. This genus offers the Pearl, Moonlight, Snakeskin and Three-spot Gourami. The Pearl Gourami is widely considered to be the most beautiful of these. It is a silver bodied fish with a black streak that runs from nose to the base of the tail. Additionally, the body, fins and tail are covered with small white spots giving the fish a beautiful pearlescent appearance.

Despite their intense coloring, Gouramis are pleasantly easy to care for. They prefer warm water in their tanks, up to 85˚ but no less than 65˚. The must have lots of swimming room and the ability to reach the surface as the labyrinth organ requires above-surface breathing in order for these fish to survive. They like to swim all over, not sticking to one area of the tank by floating up, down, back and forth. These are not schooling fish, so having more than one in a small tank is not advised. pH should be between 6.0 and 8.8.

In keeping with their easy-going personality, the Gourami is not at all a picky eater. They are quite happy with high quality flake foods. A good treat for Gourami are brine shrimp or blood worms.