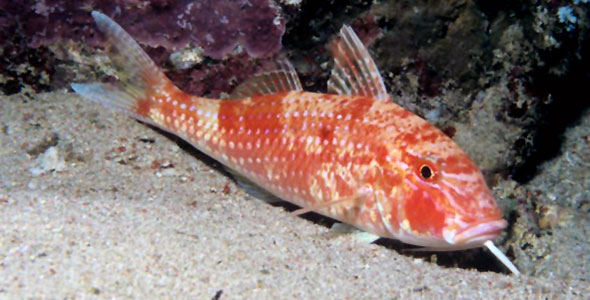 While not as brightly colored, large, or exciting as some other tropical offerings, the Goatfish brings more than its fair share of color, excitement, and things to watch for to the marine aquarium. Often found hugging the bottom of the reef or tank, Goatfish are bottom-dwelling carnivores that use their noses to pick through the sandy substrate in search of various invertebrates. One of the best behaved fish, Goatfish get along well with everyone in the tank and will not respond aggressively to other aggressive fish.

The most interesting and possibly entertaining aspect of owning a Goatfish is their “chameleon” like behaviors. All Goatfish have the ability to change color based on their activities and surroundings. Because of this, the Goatfish was highly prized in ancient Rome when a live fish would be placed on a platter for guests to observe while it died as they will continue to change colors during death. It was a different time, so such an activity isn’t encouraged anymore.

Upeneus vittatus – Silver and gold colored, this fish has horizontal stripes extending across its body and unique black banding on the fins and tail. Its barbels hang down from the chin like a Fu Man Chu.

Mulloides martinicus – This species of Goatfish is commonly seen as a silver fish with a yellow stripe, yellow fins and a yellow tail. However, in the wild it loves to swim with schools of Sturgeon and will change color to fit in with its companions.

Pseudoupeneus maculatus – Though this variety can change colors like the others, this Goatfish is commonly seen with a white or pale pink body that sports four spots: one over the eye, one above the pectoral fins, one in the middle of the fish, and one near the base of the tail.

Tank requirements for Goatfish are fairly simple and straightforward. They simply require a standard reef environment with water in the low 80’s and a pH around 8.3. The greatest concern when keeping Goatfish is making sure that they receive adequate nutrition. This is a very, VERY active fish that seems to be always on the go, which means they burn through the nutrition they receive from food very quickly and require multiple feedings of appropriate food.

The highest cause of death amongst Goatfish is inadequate nutrition. Though they are happy to scavenge, they should also be provided with food that will sink to the bottom of the tank. Fish, crab and clam meat are all excellent options.