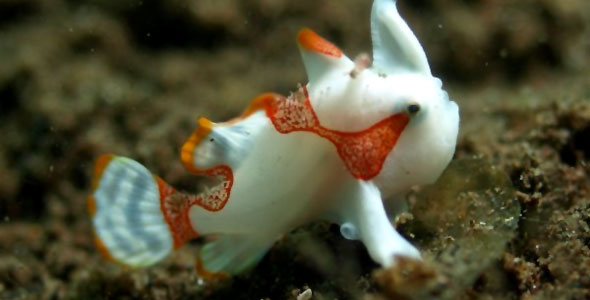 Frogfish, or Anglers, are a species of fish that have developed the ability to “fish” for their food. Their bodies are equipped with “lures” that attract other fish to them. They can eat fish up to twice their own size, making them unlikely candidates for the community aquarium. They are a highly sought after aquarium fish despite this, as their unique behaviors, interesting coloration, and wild body shapes make them quite a sight. They are quite stocky, appearing more round than streamlined. They are not especially active, preferring to lay in wait on the floor for fish to pass by. Many can change their colors to match their surroundings, or they have bodies that mimic their surroundings in appearance by looking like coral or an outcropping of rock.

Frogfish, or Anglers, have a highly specialized method of hunting. First they identify their potential prey and follow it with their eyes. Once the prey has gotten within a few body lengths of the Frogfish, it will wave its “lure” in a way that mimics the approaching fish. As the prey approaches, the Frogfish will stealthily adjust itself in preparation before suddenly snapping open its mouth and sucking the prey in like a giant vacuum. The mouth can open up to 12 times its normal size, making escape of the sudden water vacuum nearly impossible. The attack can take as little as 6 milliseconds.

Sargassum – The Sargassum Frogfish resembles an outcropping of coral more than it resembles anything fish like. Most often seen in golds and browns, its unique appearance provides excellent camouflage through mimicry.

Wartskin – The Wartskin Frogfish looks like a children’s bath toy. It will change colors so that it can blend in with its surroundings.

Anglers are relatively hardy, though difficult to find. They have no special tank requirements other than those of a well established reef tank. The most important part to owning a Frogfish, or Angler, is providing it with a bright and colorful background as well as stimulation. A brightly decorated tank will prevent it from losing color and becoming dull.

Frogfish are incredibly difficult to feed. They will often refuse food and die of starvation. On the other hand, if they do accept food, they will become obese and die from over-eating. The best way to feed Anglers is to purchase live feeder fish. This will provide stimulation as well as encourage the Angler to eat without becoming too complacent.