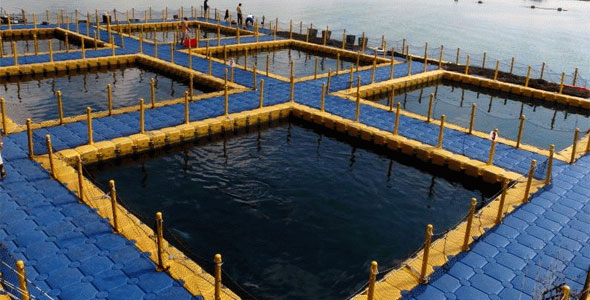 Aqua-culture, aqua-cultivation, fish farming… these are all words used to describe a quickly emerging method of providing water raised products such as sea food and even some vegetation. It is an industry that ranges from the cultivation of aquatic plants to aquatic animals in a controlled system for commercial purposes. It is similar to other forms of animal husbandry; the products, both plant and animal, are cared for, protected, fed, and expected in return to increase in quantity and value. Through the use of aqua-cultivation the resources necessary to locate and capture fish in the wild are reduced and “fish farming” has managed to boost consumer confidence and provide greater harvesting of freshwater and seafood products.

While it is a fast growing industry in the United States, China is currently the leading producer of aqua-cultivated produce. In fact, Asian countries provide the majority of the world’s aqua-cultured products with Chile and Norway following closely behind and the United States trailing behind everyone.

Though aqua-cultivation on the scale we see in the present day is relatively new, the concept is as old as 2500 BC in ancient China. Farmers would capture carp after a river flooded and remove the fish to artificial holding lakes and ponds. There is mention of aquaculture in the Bible, Egyptian Hieroglyphics, and even seen in the pond at Alekoko in Hawaii. Despite its long-standing presence in our history as humans, aqua-culturing is often misunderstood, in large part because of miscommunication between the industry and the consumer.

The concerns regarding the industry range from impacts on the natural populations to care for the fish themselves. It is important to bear in mind that while aqua-culturing can be very damaging to a small, local area, its impact on the global environment is considerably less than the exploitation of wild fisheries. While there are concerns involving waste management, antibiotics, feed and escapees, research and other improvements have helped to lessen many of them in the last twenty years. This does not, however, lessen the impact of the destruction on the small scale. Perhaps the greatest concern for wildlife enthusiasts is the worry that a domestic fish such as a salmon will escape from their pen and move into the wild where they will ravage the food sources for wild salmon, as well as dilute the genetic lines.

Concern for the welfare of the animals is also important. Humans prefer to believe that their food is treated humanely as there are five basic freedoms that most can agree all animals deserve (especially before they are slaughtered): Freedom from hunger and thirst, Freedom from discomfort, Freedom from pain, disease, and injury, Freedom to be themselves and express natural behaviors, and Freedom from unnecessary fear and distress. While there is some debate over the level of sentience, perception, and awareness of aqua-cultured species, it cannot be denied that fish have some memory and do feel some level of pain, fear, and stress. Therefore, their welfare must be considered in aqua-cultivation as much as any animal involved in meat production. Changes in over-crowding are necessary to provide fish with the five freedoms and to improve the welfare of the animals before they are processed.

There are many prospects with regard to the industry. With the experimentation into fish memory and the benefits found in the cultivation of aqua-vegetation, sustainable practices are being developed and put into use. As with any industry, new technologies and information are constantly forming and shaping the way fish farms are developing and processing.