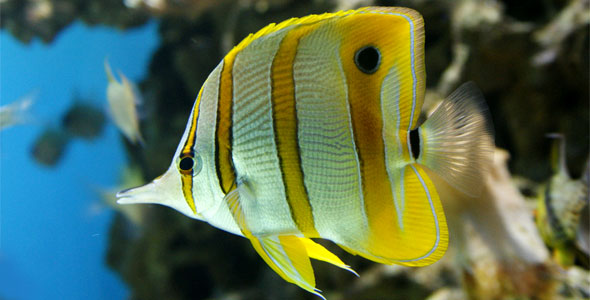 Butterflyfish are one of the most common tropical fish to be found in reefs around the world. Their bright colors and unique shape attract admirers of all ages. It is no surprise then, that they are one of the most popular species of fish desired in a saltwater tank. They resemble angelfish, with thin bodies that are disk shaped. Most of the 1114 species of Butterflyfish are brightly colored and attractive, though some can be a bit dull. In captivity, this fish grows to be approximately six inches long; it resembles a tea cup in size, though certainly not in shape. Their scales can be found in a variety of patterns and colors including stripes and spots in yellow, orange and blue. Interestingly, when Butterflyfish settle into their reefs for the night, their coloring will dim significantly in order to avoid detection by predators.

Raccoon Butterflyfish – An excellent choice for beginning tropical owners and is easily identified by its coloring; adults are yellow with black and white banding surrounding the eyes.

Threadfin Butterflyfish – White and yellow with banding around the eyes and a trailing thread on the dorsal fin (found only in adults).

Bannerfish – White with broad black lines that extend vertically; yellow can be found in the tail and dorsal fin. These fish also display a long filament extending from the dorsal fin.

Long-nosed Butterflyfish – These varieties of Butterflyfish tend to be more sensitive to the aquarium and significantly pickier about what they eat. Brine fish are a necessity when feeding these.

Butterflyfish can be highly territorial and require lots of space in which to establish their territory. Though some species may be comfortable swimming in schools, the majority prefer to pick a mate and swim in pairs; this is a species that will mate for life. It is not recommended that Butterflyfish be added to new tanks as they require steady nitrite levels; this species is highly sensitive to nitrites. They require a healthy reef tank, steady pH of about 8.4, aeration, excellent lighting and low levels of ammonias, nitrates and nitrites.

Though some breeds of Butterflyfish will eat anything you give them, this species thrives best with a live coral polyp to live off of, a little vegetation, and some fresh meat. It is important to learn what sort of diet the particular species you are considering requires as some have more stringent dietary requirements than others, but most will be fine with shrimp, worms, coral polyps, algae, flake food and brine shrimp or plankton.