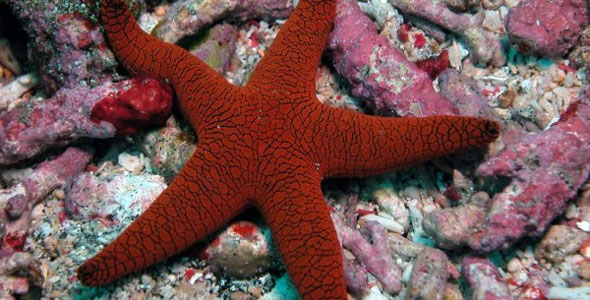 Starfish are one of the wonders of the sea that quickly catch the heart and imagination of onlookers and children from a young age. The idea of owning one quickly takes root amongst aquarium owners when they begin to look into establishing a marine aquarium and realize that there are starfish that can be purchased and added to their tank. While owning starfish is not something to be undertaken lightly, there are some species of starfish that are a bit easier to establish and may be suitable for established beginners and intermediate marine aquarists.

Red Brittle Sea Star – Commonly found in the Caribbean, this deep red sea star has a central disk and long, thin legs covered in spines. They are nocturnal, preferring to hide in rocks and crevices throughout the day and coming out at night to scavenge.

Fancy Red Sea Star – This bright red, banded sea star is an excellent beginner sea star as far as sea stars go. It is nocturnal, but will learn to roam during the day as it adapts.

All starfish are intolerant to copper based medications and very intolerant of changes in water quality. Be sure that your tank is fairly established before attempting to add sea stars. The starfish listed in this article prefer tanks with ample hiding places and should be kept in large tanks with plenty of room as they can grow to be nearly a foot in length. All starfish should be acclimated to their new tank using the drip acclimation method.

Begin by floating your new addition, in its sealed bag, in your aquarium water for 15 minutes so that it can acclimate to the new temperature. Tilt the bucket slightly so that it is at an angle and carefully pour the water and starfish into the bucket. DO NOT expose the starfish to the air. This is critically important as sudden exposure to air during this process can kill your starfish! Tie a couple loose knots in your tubing and then, using the tubing, run a siphoned drip line into the bucket from the aquarium. Watch the flow of water; you want a drop speed of 2-4 drops per second. Watch the water level. When it has doubled in volume, remove half and begin dripping water in again until it has doubled once more. Once this is finished, you can release your starfish into the tank.

These sea stars should be fed finely chopped fish meat, shrimp, and liquid invertebrate foods. Be sure to inject the food directly beneath the disk of the starfish to ensure that it receives the food.