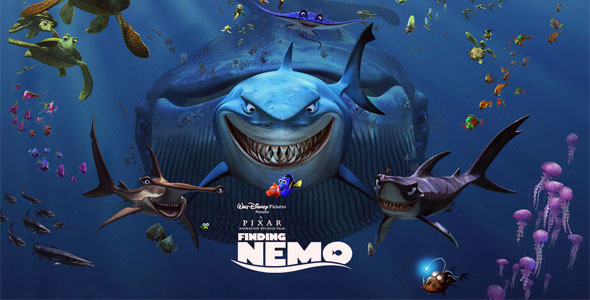 Finding Nemo is a Disney/Pixar film that was released in 2003 with a cast that included Albert Brooks, Ellen DeGeneres, Willem Dafoe, and Geoffrey Rush. Their unique voice talents give the characters life and color, endearing them to the viewer. The film is a spectacular example of Disney’s attention to detail and Pixar’s amazing skill with computer generated graphics. Prepare to dive and be transported to the underwater world of Finding Nemo.

The story begins on a lovely tropical reef. Two clownfish are exuberantly exploring their anemone and planning their future with a full clutch of eggs resting peacefully beneath them. Their plans are shattered, however, by the arrival of a predator who destroys their lives and leaves the father, Marlin, with only one son named Nemo. Driven by fear and protectiveness, Marlin attempts to shield Nemo from every aspect of life in order to protect his young son from being hurt and to further prevent Marlin from experiencing once again the pain of losing everything he loves. Young Nemo is just beginning school and in an accident that occurs while on a field trip, he is captured by a diver. Marlin and Nemo both embark of journeys of development; Marlin learning that you cannot control everything and Nemo learning to overcome his difficulties.

Pixar, known as the division of Disney responsible for films such as Toy Story, produced this film and you can see their expert handiwork in every frame. The brilliant coral reef is brought to life with exuberant color, excellent shadowing, and details down to the shimmer of sunlight on the sandy bottom. While there is certainly not as much definition to the fish as even some computer generated films now display, they are still unique and detailed. It is interesting to watch the change in water as Marlin and his friend Dory travel to Sydney, Australia. While the reef is obviously a shallower area of the ocean, the shift from shimmering sunlight to dim lighting and eventually darkness is seamless.

Character development is something that Disney is rarely lax with and Finding Nemo is no different. The decision to split up the father and son, placing both on an independent journey of self-discovery is critical in helping the viewer to separate the two and identify them as individuals rather than a duo with intermingled needs and personality. In fact, it is only when separated that they truly begin to develop. With the addition of supporting characters such as Dory and Gill, Marlin and Nemo are given a vessel with which to overcome their weaknesses and instead to develop new strengths.

Overall, Finding Nemo is an excellent film for parents and kids alike. It encourages children not to be held back by their perceived disabilities and reminds parents that all children must grow up. This film is easily appropriate for children five and up as long as caution is exercised with the first ten minutes of the film, which can be rather frightening for younger children.