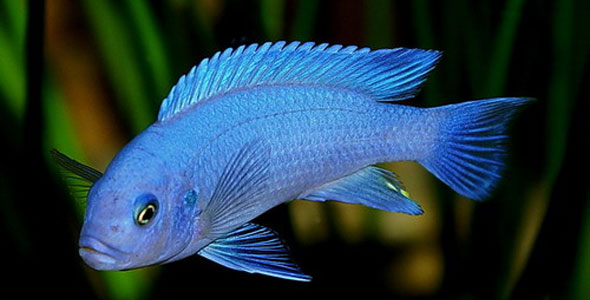 The most prolific of the freshwater fish are the cichilids. They are found in lakes and streams around the world, from South America to Africa, from North America to Asia. The family of Cichlids covers such fish species as wrasses and damselfishes, and covers a huge number of fish overall, with 1300 scientifically described, new species discovered every year and an estimate of total species around 3000.

Cichlids have a variety of different sizes and shapes. Some are as small as an inch, while others are more than three feet in length. So what makes these thousands of types of fish all considered one type of fish? What characteristic identifies them as being Cichlids? All cichlids have one trait in common: they all share the fusion of the lower pharyngeal bones which makes a single tooth-bearing structure. This makes these fish efficient feeders capable of capturing and processing a wide variety of foodstuffs. While this is their greatest common trait, others can also include a single nostril on each side of the forehead where other fish have two, there is no bone shelf beneath the eye, the lateral line is divided into two sections, and the exit of the small intestine is on the left side rather than the right.

Mostly herbivores, Cichlids tend to focus their appetites on algae, making them easy to feed in the aquarium. However, some species are detritivores and still others are carnivores. It is important to know what species you own so that you can provide them with an appropriate diet.

Perhaps the most interesting characteristic of these fish is their reproductive habits. Cichlids are very protective and involved parents that will care for and nurture their young until they are a few weeks and in some cases months old. There are four types of “brooders”: open brooders, cave brooders, ovophile mouthbrooders, and larvophile mouthbrooders. Open brooders are cichlids that lay their eggs out in the open. The male will then patrol the perimeter and fight off potential threats while the female tends the eggs, fanning water over them, removing any that are infertile and guiding the newly hatched fry while foraging. Cave brooders lay their eggs in caves, often attaching them to the roof of the cave. As they grow, the fry will communicate with their parents through body movements, and act that can be quite interesting to watch.

The varieties of Cichlids in the aquarium trade are large and hardy. Most are freshwater fish; however, some prefer a brackish environment. They should be kept in a well-planted or aquascaped tank with lots of hiding places. They require a neutral pH of about 7.0 and temperatures in the mid-70’s˚F. Some species are highly aggressive and should not be added to tanks with small or shy fish.