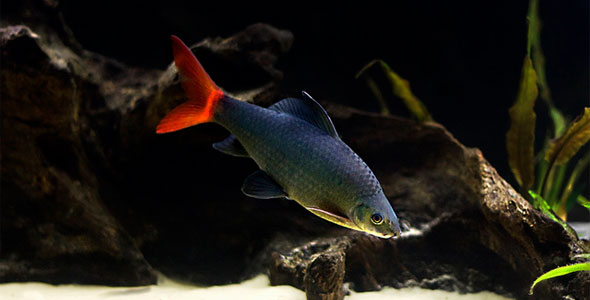 They look like sharks and move like sharks, but the freshwater fish you see in the pet store that are called “Sharks” are really just a species of minnow. Despite this, freshwater Sharks can be a fun addition to the aquarium and are hardy and easy to care for. They are not a schooling fish and should not be kept with other Sharks. They vary in size from just a few inches to nearly two feet and are excellent jumpers. They have no problem leaping two feet from the tank and out onto the floor so it is imperative when keeping Sharks that the entire tank be covered with a lid. This species is generally peaceful around tankmates of similar size, but it is an aggressive feeder and those fish that cannot compete with it during feeding times will simply be left on the sidelines while the Shark gobbles everything up.

Red-Tailed Black – The most “shark” like in appearance, the Red-Tailed Black Shark swims through the waters with a deep black body and a stunning coral-red tail. It has two barbels or whisker like protrusions up by the mouth and grows to be about six inches in length.

Apollo – A silver-bodied fish, the Apollo Shark has a thin black line that runs horizontally across the body from the nose into the tail. It lacks the barbels of the Red-Tailed Black and tends to be more aggressive. It grows to be about ten inches in length.

Ruby – The Ruby Shark is very similar to the Red-Tailed Black, though rather than a black body, it sports a diluted red with the same bright, coral colored fins. It grows to be about six inches in length.

Bala – The Bala Shark is a fair rival for the Red-Tailed Black in “Most Shark-like”. Though it is easy to see that the Bala is NOT an actual shark, the markings on the fins and tails give it an “edgy” and “shark-like” appearance. This fish can grow to be ten inches in length and is the least aggressive.

Because of their potential for growth and active personalities, large tanks are recommended for Shark owners. Their water requirements are fairly easy to meet as temperatures should be between 75-81˚F and the pH between 6.0 -7.5. These are hard jumpers and owners must make sure that their tank is completely covered with a well-fitting lid or Sharks will easily escape.

These fish tend to be carnivores and feed predominantly on invertebrates. While flake feeding is acceptable, owners should also consider feeding live and frozen options such as bloodworms or daphinia. They also enjoy earthworms and crickets.