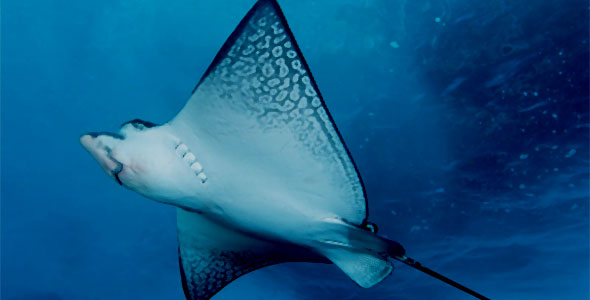 Rays are the ideal addition for those advanced aquarists that would like to add something beautiful, deadly and challenging to their aquarium. Not to be taken lightly, any of the rays for the aquarium can be deadly to handlers or during tank maintenance as they have poisonous spines at the base of their tails. All rays can grow to be quite large and most require a minimum 180 gallon tank, while others will not survive in anything smaller than 360 gallons. All rays must be kept in aquariums with soft, sandy substrates as anything rough can damage their delicate undersides and cause infection. Rays are related to sharks and make a suitable alternative to sharks, which are rarely able to be kept in aquariums because of their size. The “wings” of the rays are actually pectoral fins. Most rays are carnivorous and have flat, crushing teeth.

Fiddler Stingray – One of the guitarfish or banjo sharks, the Fiddler Stingray is found off the coast of Australia and prefers sandy bays and seagrass beds. They are more rounded than others of their genus, looking like an upside down plate. They are a light brown with teal highlights.

Round Stingray – Found in the Pacific Ocean, often off the coast of California where it is well known for stinging people who accidently step on it, the Round or Haller’s Round Ray is a bright golden brown with deeper golden spots.

Thornback Stingray – Often found in the warm waters of the Gulf of California, the Thornback Stingray is heart-shaped with a long tail, two dorsal fins and a caudal fin. It receives its name from the three rows of large, hooked horns that start in the middle of the back and run onto the tail.

All rays prefer warmish waters with stable temperatures. As long as it is warmer than 50˚ and the temperature doesn’t fluctuate, your rays will be pretty happy. They MUST be kept in a tank with a soft, sandy substrate. The underbelly of the ray is delicate and easily damaged by rough rocks. Rays should be kept with large fish as they will eat anyone smaller than them and should be fed regularly to ensure they don’t snack on the rest of your tank.

Rays are carnivores and will eat fish, clams and crab. They crush them between their jaws with their crushing teeth.