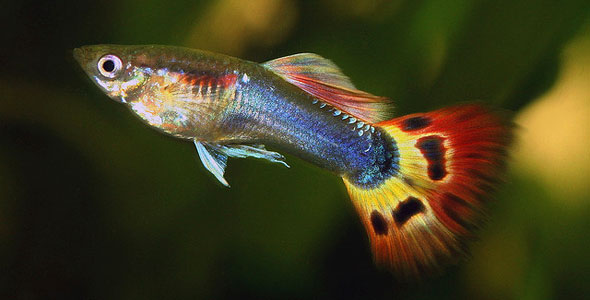 Poeciliidae, more commonly known as mollies, guppies, platies or swordtails, are one of the most common freshwater aquarium fish and closely resemble killifish and minnows. They are peaceful fish, making them ideal for the community aquarium. Relatively small, they barely reach four inches and are a beautiful addition to any tank. It is interesting to note that this species of fish is “live bearing”. While most fish procreate through the laying and then fertilizing of eggs, Poeciliidae females hold their eggs internally, where they are fertilized by the male with a special fin called a gonopodium. The young develop and hatch within the female and then swim free. A single fertilization can produce several hatches of young fry.

There are two sub-species contained within the Poeciliidae species: the Xiphophorus, which contain platys and swordfish, and Poecilia, which contains the guppies and mollies.

Guppies – Guppies are perhaps the most colorful of the Poeciliidae and display flowing fan tails and dorsal fins. They can be seen in a variety of bright colors including blue, red, orange and yellow. They are also commonly seen with spots and stripes.

Mollies – Mollies are similar in shape to guppies, but are a bit plainer. They lack the extravagant fan tail of the guppy and are most commonly seen in gold, white and black, lacking the bright and exuberant coloring of guppies.

Platys – Wide-eyed and rather plain, the Platy sports a small, fanned tail and dorsal fin. They are commonly colored gold, white and black, with some variation and spotting found occasionally. They are difficult to distinguish from Swordtails as inbreeding has led to a decline in the uniqueness of the two fish.

Swordtails – Though female Swordtails are almost indistinguishable from Platys, male Swordtails certainly live up to their name. The Swordtail display a long, protruding lower portion that extends from the tail, making it appear as though the fish has a blade extending from the tail. They are commonly found in gold, white and black with variations and spotting occasionally seen.

Caring for Poeciliidae is quite easy. This is a fish that likes to school, so one male with a few females tends to be the ideal in a community tank. They tend to do best in a warmer tank with water around 75˚F and a slightly alkaline pH. If you add mollies to the tank, it is recommended that a teaspoon of salt be added to every 2 1/2 gallons of aquarium water. Females can give birth every thirty days, so overcrowding is often a concern. Additionally, it places females under great stress, so they should be removed from the tank while birthing and for a few days following to recover.

Any of these fish will happily take fish flakes and will never require live food, though they may enjoy getting to snatch brine shrimp that wriggle in the water. Because their young are born fully developed, they do not have any special dietary needs. Care should, however, be taken to make sure that fish flakes are finely ground when feeding fry. Be aware, if the young are not removed from the tank it is highly likely that they will become snacks for the larger fish, including their parents.