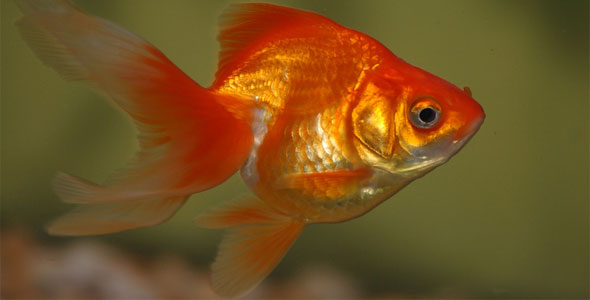 As the earliest fish to be domesticated, almost everyone has seen or owned a Goldfish at some time in their life. The Goldfish is a small member of the carp family, first domesticated in China more than one thousand years ago. It first became popular to keep these fish in ornamental ponds and gardens during the Tang Dynasty. By the Song Dynasty, domestication of goldfish was so prominent that it became illegal for the common people to raise yellow goldfish as yellow was an imperial color and the Empress had a special pond for them. During the Ming Dynasty, goldfish began to move indoors and spread across the world. They were such a hit in Europe that it became in vogue for newly married men to give their wives a goldfish on their one year anniversary.

One of the hardiest species of domestic fish, the Goldfish has been known to survive for up to 25 years in captivity and reach lengths of two feet. There are more than 125 varieties of Goldfish now, with many highly prized and desired by breeders, collectors, and enthusiasts.

Common – The most recognized Goldfish out there. It is most commonly found in a solid gold color, but can also be seen in red, white, black and yellow.

Black Moor – One of the “fancy” Goldfish, the Black Moor has long, flowing fins and a distended abdomen. Also, its eyes appear to bug out of its head and it has reflective golden pigment beneath the black of its scales.

Comet – This is the most common of the fancy varieties. It is similar in appearance to the common goldfish, but it is spotted and has a long, deeply forked tail.

Fantail – With its egg-shaped body, the Fantail is a shocking first sight. This is the western version of the Ryukin fancy goldfish and has a high dorsal fin with a long, quadruple tail.

Shubunken – The Shubunken resembles the Goldfish in shape, but is covered in calico patterned scales making it a beautiful addition to any tank.

Veiltail – As its name suggests, the Veiltail fancy goldfish has an extra-long and flowing double tail that resembles a veil as it floats in the water.

Though they are a hardy fish, Goldfish still require some care. They release incredible amounts of waste both in their feces and through their gills, and when this waste builds up it can reach toxic levels in a very short period of time. A good rule of thumb is to provide twenty gallons of water for each goldfish, so two goldfish should be kept in no less than 40 gallons of water. They are a cold water fish and can survive in an unheated tank, however rapid temperatures changes can kill them. The best temperatures for goldfish are between 68-72˚F. Goldfish require light to keep their bright scales and may eat aquarium plants.

The stomach of a Goldfish is only as large as its eye and it is important that owners keep this in mind as Goldfish will eat and eat. Small meals spread out through the day is best for them. Flake food is sufficient, but an enjoyable treat is boiled spinach or lettuce and brine shrimp or bloodworms. DO NOT feed dried pellets. Always soak goldfish pellets or they will swell in the stomachs of the fish and affect the air bladder, causing the goldfish to swim sideways or upside down.