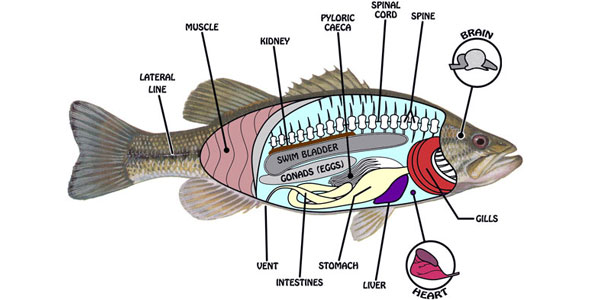 Fish have a unique anatomy that is necessary for their lifestyle of living in the waters of the world. Water is denser than air, holds little oxygen, and absorbs more light.

When discussing fish anatomy, it is best to begin with what can be seen and to start with broad definitions.

Body Basics
Anterior End – The anterior end of the fish is the end with the body.

Posterior End – The posterior end of the fish is the end with the tail.

Dorsal Side – The dorsal side of the fish is the top of the fish, including the spine.

Ventral Side – The ventral side of the fish is the bottom of the fish that includes the belly.

Anteroposterior Axis – The horizontal axis of the fish that runs from the anterior end to the posterior end and divides the dorsal side from the ventral side.

Dorsoventral Axis – The vertical axis of the fish that runs from the dorsal side to the ventral side and divides the anterior end from the posterior end.

Lateral Line – A sense organ that is used to detect movement and vibration in the water. It is distinguished in some fish by a line that runs laterally along the sides of the fish.

Caudal Peduncle – The narrow portion of the fish’s body at which the tail is attached.

Heady
Head – The head of the fish contains the snout, eye, jaw, gill cover, and cheeks.

Mouth – The mouth of a fish can be in one of three positions: terminal or forward facing, superior or turned upwards, and subterminal or inferior in which it is turned downwards.

Fins
Dorsal Fins – Located on the back, a fish can have up to three dorsal fins. They are used to assist in sudden stops and turns and to help prevent the fish from rolling.

Pectoral Fins – Located on each side of the fish, they are found just behind the gill cover or operculum.

Pelvic/ Ventral – These paired fins are located below the pectoral fins on the ventral side. They are used to assist in going up or down, for sharp turns, and for quick stops.

The Largest Organ
Skin – Most fish have scales for skin, some have scutes, and others have neither and are called naked fish.

Placoid Scales – Also known as dermal denticles, are often found on sharks and rays and made of dentin covered by enamel. Very similar to teeth.

Cycloid Scales – Small and oval-shaped, these scales display growth rings like the scales on the shell of a turtle.

Internal Matters
Gas Bladder – Also known as the swim bladder, it is the organ that gives fish their ability to control their buoyancy without wasting energy swimming. It is only found in bony fish.

Gills – The breathing or respiratory organ of the fish, it allows fish to extract oxygen from water and to excrete carbon dioxide.

Labyrinth Organ – Found in some fish, it is an organ near the brain that allows certain species to draw oxygen directly from the air.