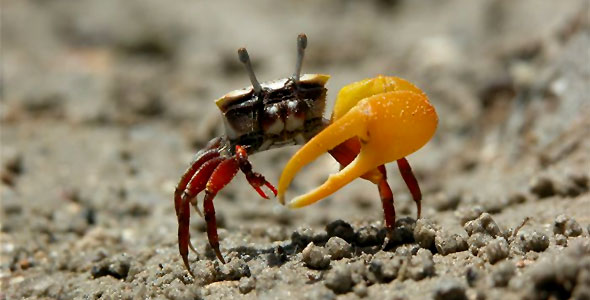 Crabs are an interesting addition to the aquarium. While they can be managed by novice aquarists, they often require their own tank or that major adaptations be made to an already existing aquarium. Fiddler crabs should not be added to a straight freshwater aquarium as they prefer brackish water with an elevated level of salinity.

Despite popular opinion, Fiddler crabs are not, in fact, completely aquatic. They spend most of their lives in tide pools, lagoons, and tidal mud flats; all places with brackish or slightly salty water. They received their name from the extra-large, fiddle shaped claw that the males develop in order to attract females. Female Fiddler crabs do not develop the extra large claw. During the mating season, the male Fiddler crab will raise the large claw into the air and tap it against the ground again. Multiple males may fight for the attentions of a female and if a male loses his claw, he will re-grow a smaller claw while developing a big claw on the opposite side.

Because Mini or Fiddler crabs are only semi-aquatic, owners must take care to provide them with an above water “play” area. This often requires a complete re-scaping of your tank, or the purchase of a different, smaller tank just for the crab. The ideal tank for a Mini or Fiddler crab is one that mimics the shorelines and lagoons from which it has been extracted. An elevated sandy substrate with a defined “shore” and “water” is ideal; aragonite is best as it provides calcium and minerals while promoting higher pH. Be sure to provide rocks and driftwood for your crab to scuttle over and around or to hide beneath, but don’t crowd the beach. Your crab must have a place to burrow and make its home. Good filtration is also important as it provides water movement while keeping the water clean.

Crabs are simple to feed. They prefer flake food and algae as well as freeze dried options such as bloodworms or brine shrimp.