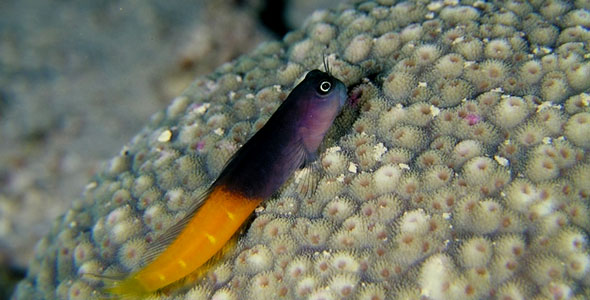 Often over-looked for brighter and more colorful fish, the Blenny is an absolute must for any aquarium. Though they are small, Blennies’ long bodies, large eyes, and funny faces, as well as their amusing posturing, are great fun to watch. Blennies spend most of their time on or hovering just above the sea floor and are often seen propping themselves up on their pectoral fins and observing everything that goes on in what they consider to be their kingdom. Certain types of Blennies have antennae-like protrusions called cirri which make this posturing behavior even more amusing. Nervous and territorial, nosey and energetic, the Blenny is often seen darting into a rock or under the sand and then quickly zipping back out and across the tank to see something that has caught its interest. What they lack in color they certainly make up for in personality.

Bicolor – With tiny cirri extending from the top of its head like eyebrows, the bicolored Blenny is an amusing sight to behold. Divided evenly, the head and front portion of the body are a dark blue or purple while the back half and tail are a bright orange or gold. They make quite a picture perched on coral as they observe the goings-on of the tank.

Golden – Somewhat plain, the Golden Blenny lacks cirri and is a solid, bright yellow in color. Still quite a sight, it is a lovely addition to any marine aquarium.

Redlipped – The Redlipped Blenny is perhaps less red-lipped and more red-headed. The body of this little fish is white or silver, but the head is a deep maroon color.

Blennies are quite hardy and once adapted to your tank are likely to be there for quite a while. Their greatest requirement is hiding places. Blennies love to be able to hide in crevices, under sand and even in the occasional, uninhabited shell. Make sure you have lots of little locations that they can claim as their own. Be careful keeping Blennies in tanks with more aggressive fish. A Blenny is not the type of fish to back down from a fight as they are stanch defenders of the space they’ve claimed as their territory.

Blennies are either herbivores or carnivores, so be sure to research which diet is appropriate for your Blenny before purchase. Herbivore Blennies need a constant and hearty supply of foods to graze on, including shredded lettuce, algae discs and the occasional bit of fruit. Carnivorous Blennies enjoy invertebrates like worms, brine shrimp or amphipods.