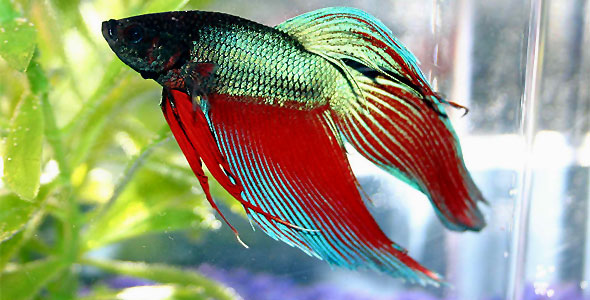 Vibrantly colored and often found in small, individual containers, the Betta or Siamese Fighting Fish quickly catches the eye of the freshwater fish finder. Their delicate fins, in explosive colors, captivate old and young. They have been seen in flower vases, shallow bowls and larger tanks. Though their name may make them seem aggressive, a single male or multiple females can co-exist quite happily in a colonized tank. Betta’s are easy to breed and it can be a fun experience to watch a male and female breed as they create a bubble nest. The male will rise to the surface and blows small bubbles that are coated with saliva. These bubbles join together to create a nest. The female then lays her eggs. Both fish then gather the eggs in their mouths and carry them to the next, popping each egg into its own bubble. The male then defends the nest, even from the female, until the eggs hatch.

Superdelta – Superdelta Betta have the same fin formation as the Delta Betta, but in addition to the banding on the fins, these fish have striations bringing additional color into the fins and tail.

Crowntail – A flashy variety, the Crowntail Betta has full fins that are fringed at the ends giving the appearance of a crown with tines. This fringe creates a lace-like appearance and makes these Betta absolutely stunning.

Betta can happily survive in shallow water as their ancestors lived in rice paddies, shallow streams and small ponds. Betta have an extra organ in their brains known as the labyrinth organ which allows them to breath oxygen from above the water, making it important that Betta have access to the water surface. The most important requirement for Betta care is warm water. Owners often forget the heritage of this species, so don’t forget that shallow water warms quickly and Betta are used to temperatures over 80˚F. They will become listless if the temperature falls under 75˚F. They can survive happily in a well populated tank, however it is important to limit your tank to one male and be sure that you do not keep Betta with aggressive fish as their long-flowing fins can be easily shredded by aggressors. Additionally, if your Betta end up breeding, you must take care to remove the male and the eggs from the other fish, including females, as the male will attack anything he sees as a threat. Once the fry hatch, the male should be removed from the fry and placed back in the general population.

Betta are carnivores and have a specially developed mouth that is built for snatching hapless bugs that tumble into the water. Live food is ideal for the Betta: brineshrimp, daphnia, mosquito larvae, and glassworms are all preferred. However, the Betta will also eat frozen and freeze dried foods. They can survive off flake food, but it should be supplemented with live food whenever possible and frozen food if necessary.