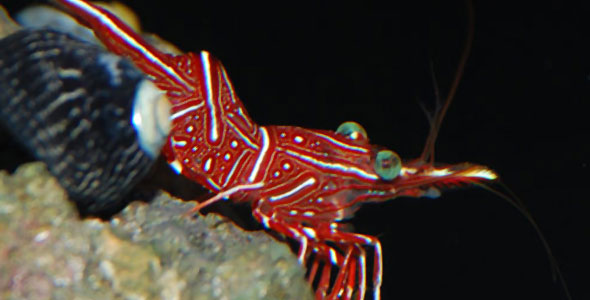 Beginning marine aquarists are undertaking a huge challenge since establishing a successful marine aquarium is no simple task. But once all the fish have been purchased and the community establish, they have the option of adding some addition sea creatures. There are some varieties of shrimp that are perfect for this as they are easy to care for, do not damage reef tanks, and get along well with fish (as long as they aren’t at risk of becoming dinner).

Snapping – Also known as the Symbiosis and Pistol Shrimp, the Snapping shrimp is named for the sound it makes when opening and closing the pincher. If judged by sound alone it may be confused with the violent Mantis shrimp; however, the Snapping shrimp is quite peaceful. It does best in a tank with Gobies as it likes to share a burrow and food.

Camel – The Camel shrimp, also known as the Hinge-beak, Dancing, or Candy shrimp, is named for its “beak” that is usually angled upwards. It has a confused pattern of red and white striping; males also have larger claws than females. It loves to spend time with others of its species, though bear in mind that Camel shrimp may nibble on certain types of anemones and coral.

Saron – The Saron or Common Marble Shrimp has been a shrimp of note since 1811. It is a color changing shrimp; days are spent in boring shades of brown, white and green. At night, however, this nocturnal shrimp comes to life and changes into a deep red that helps it blend into the shadows. It needs places to hide during the day. However, once acclimated, it will begin to wander the tank during daylight hours.

Blood Red Fire – One of the most popular shrimp, the Blood Red Fire shrimp is known by a number of other names including Blood Shrimp, Fire Shrimp, and Scarlet Cleaner Shrimp. They are a deep, blood red with white spots and long, white antennae. They prefer tanks with an overhang or cave where they can avoid bright lights and set up “cleaner” stations for the fish in the tank.

Peppermint – This shrimp is known for its ability to control glass anemones. It is a white shrimp with pink and red bands that make it look like the candy it is named for. Peppermint shrimp prefer tanks with plenty of hiding places and is a highly social addition to the aquarium.

Though they are small, adding shrimp to your tank is not something that should be taken lightly as they make a big impact in how you handle your tank. All shrimp are unable to tolerate copper in the water and copper based medications cannot be used in a tank that houses shrimp. They also cannot handle high nitrate levels, making water maintenance critically important. Additionally, they require iodine supplements in order to ensure that they successfully molt. Be sure that you do not add ornamental shrimp to a fish tank where they will be considered a fun snack! Most shrimp are quite beneficial for the tank as they stir the substrate and remove debris and detritus from the water, substrate, and reef. They do best in a soft, sandy substrate and in tanks with numerous crevices and rocks and low-ish lighting.

While all shrimp will happily scavenge for food, they often require supplementation. The shrimp listed here will happily eat foods such as brine shrimp, plankton, flake foods, frozen foods, and fish meat cut into small pieces.